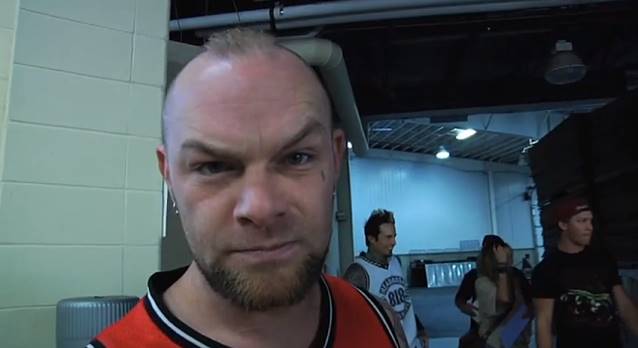 In the two-minute video below, bassist Chris Kael of Las Vegas metallers FIVE FINGER DEATH PUNCH shares his top tips for being on tour (courtesy of Digital Tour Bus). The clip was shot on July 27 in Tinley Park, Illinois during this past summer's Rockstar Energy Drink Mayhem Festival. Also available is a three-minute video recap of FIVE FINGER DEATH PUNCH's current headlining tour.

Billboard.com has uploaded video footage of FIVE FINGER DEATH PUNCH talking about their cover version of the traditional folk song "The House Of The Rising Sun", which appears on the band's "The Wrong Side Of Heaven And The Righteous Side Of Hell Volume 2" album.

Made popular in the 1960s by THE ANIMALS, "House Of The Rising Sun" has been covered by many different artists over the years, including Bob Dylan, Sinead O'Connor and MUSE.

"We had the idea to do this for a while," FIVE FINGER DEATH PUNCH guitarist Zoltan Bathory said about recording "House Of The Rising Sun". "The interesting thing about this song is that [it's] actually in a time signature of 6/8 which is a waltz… and rock music and waltz doesn't necessarily mix right."

He continued: "So, basically, the challenge was, how do we make this song work? How do we take away that goofy vibe and how do we make it into a rock structure?"

"The Wrong Side Of Heaven And The Righteous Side Of Hell Volume 2" track listing:

The first half of "The Wrong Side Of Heaven And The Righteous Side Of Hell" came out on July 30 and debuted at No. 2 on the Billboard album chart, selling 113,000 copies in its first week of release.

The first single from "Volume 1", "Lift Me Up", featured JUDAS PRIEST singer Rob Halford and hit the top of the rock radio chart.

"Volume 1" has sold more than 240,000 copies to date. FIVE FINGER DEATH PUNCH's three previous albums have all gone gold for sales of 500,000 copies or more.