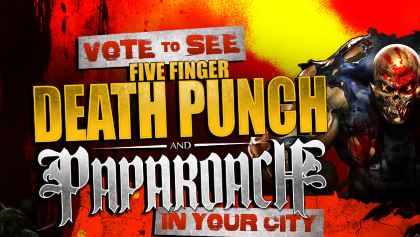 FIVE FINGER DEATH PUNCH and PAPA ROACH will head out on the road together this fall, with IN THIS MOMENT and FROM ASHES TO NEW in tow.

Before the actual tour can be announced, FIVE FINGER DEATH PUNCH and PAPA ROACH want to hear from you! They are giving fans a chance to help bring this fall's biggest tour to their city. Each week, the top voted cities will move on to the next round until the final routing is revealed on May 19.

Fans can vote for their city and monitor the progress here.

FIVE FINGER DEATH PUNCH guitarist Zoltan Bathory revealed earlier in the month that "all the music is done" for the band's next album in a video message he posted on Instagram. Bathory added that singer Ivan Moody is currently in the studio "recording the remaining vocals" for the CD, which is expected out before the end of the year.

Guitarist Jason Hook recently told "The Blairing Out With Eric Blair Show" that the group already has a title for the album picked out, but did not say what it was.

PAPA ROACH's latest album, "F.E.A.R.", came out at the end of January.

PAPA ROACH will start a U.S. run mixing festivals and shows with GODSMACK in late April.

IN THIS MOMENT's latest album, "Black Widow", sold around 36,000 copies in the United States in its first week of release to land at position No. 8 on The Billboard 200 chart. The CD arrived in stores on November 17, 2014.

IN THIS MOMENT in 2013 inked a new deal with Atlantic Records, a division of Warner Music Group, following the completion of its contract with Century Media Records. 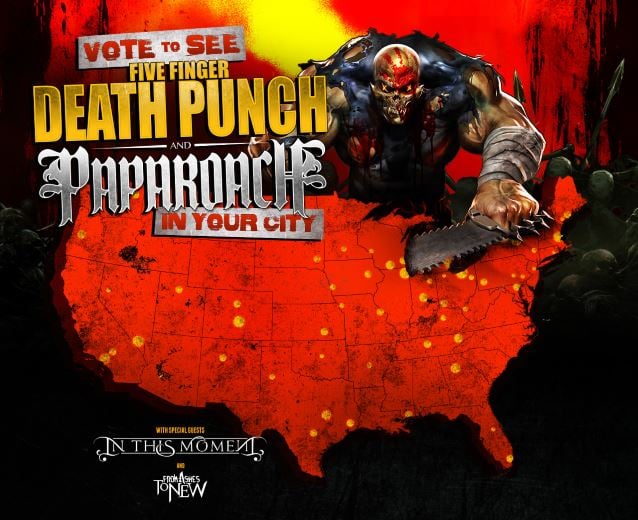