FIVE FINGER DEATH PUNCH and PAPA ROACH will co-headline a European tour, with support from special guest DEVIL YOU KNOW (featuring singer Howard Jones, ex-KILLSWITCH ENGAGE). The trek kicks off in Helsinki, Finland on November 2 and ends in London, U.K. on November 28 at Wembley Arena. More shows and special guests will be announced at a later date.

Zoltan Bathory, guitarist of FIVE FINGER DEATH PUNCH, notes: "By the time this tour takes off, our new album, 'Got Your Six', will be out already. This is our best record so far — really just a solid brick of heavy metal — so we can’t wait to play some of these songs to the European fans. This whole tour is going to be just balls to the wall night after night." PAPA ROACH singer Jacoby Shaddix adds: "We are stoked to rip up the stages in Europe with our brothers in FFDP!!!! Don't miss it! PAPA ROACH is gonna be on fire."

FIVE FINGER DEATH PUNCH and PAPA ROACH recently gave their European fans the opportunity to request the tour visit their city via a "demand campaign" housed at housed at demand.fivefingerdeathpunch.com. Several hundred thousand people from 19 countries all over Europe responded to the call to action and made their voices heard.

FIVE FINGER DEATH PUNCH will play the main stage at Download festival tonight. The band is set to drop its much-anticipated sixth full-length studio album, "Got Your Six", on August 28, preceded by a new single, "Jekyll And Hyde". Their previous albums "The Wrong Side Of Heaven And The Righteous Side Of Hell, Volume 1" and "Volume 2" both debuted on the U.S. Billboard album chart at No. 2 within a four-month period in 2013, as well as in the top ten mainstream charts all around the world. "Volume 1" has since gone gold in the U.S. and Canada, and between them, the two albums feature three No. 1 radio hit singles — "Lift Me Up" (featuring Rob Halford of JUDAS PRIEST),"Battle Born" and "Wrong Side Of Heaven", the accompanying video for which has almost 30 million views to date.

Multi-platinum, Grammy and MTV award nominees PAPA ROACH's brand of melodic hard rock has influenced many of today's big names in the metal scene. The band released their eighth studio album, "F.E.A.R.", earlier this year which charted at No. 13 in the U.K. followed by storming appearances at the Reading and Leeds festivals and a sold-out headline U.K. tour. 2015 also marks the 15th anniversary of "Infest", the band's 2000 breakthrough album, which has sold over eight million copies globally to date.

DEVIL YOU KNOW's highly acclaimed debut album, "The Beauty Of Destruction", earned them the "Best New Band" award at Metal Hammer Golden Gods Awards in 2014 and high-profile, main-stage performances at Sonisphere the same year. They are currently recording their sophomore release with producer Josh Wilbur (LAMB OF GOD, ALL THAT REMAINS).

* No PAPA ROACH
*** With special guests 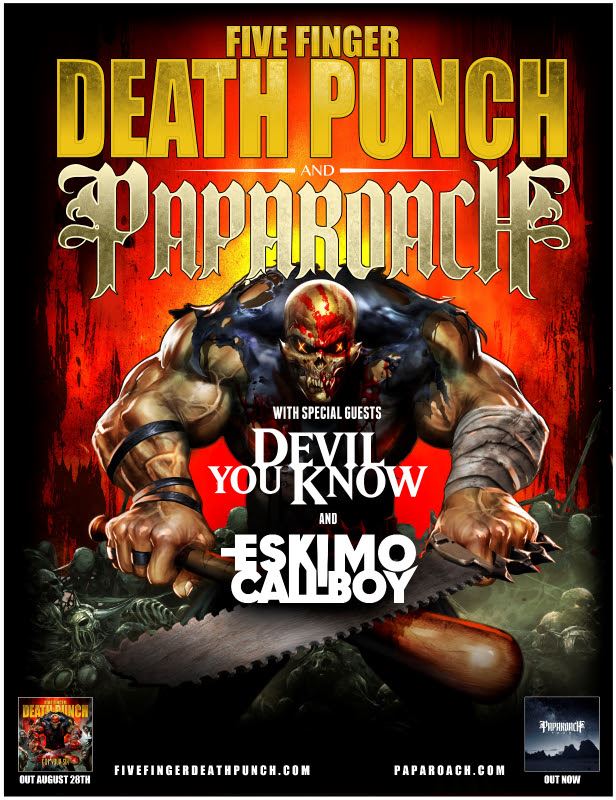