In the wake of the November 13 terrorist attacks in Paris and continued terrorist threats against France and Europe, American metallers FIVE FINGER DEATH PUNCH have decided to "postpone" their November 24 concert at the Olympia in Paris, France. The band says in a statement: "We are still on tour in Europe, and we are evaluating each show day by day. A lot of work and analysis goes into each decision."

The statement continues: "Since the events in Paris last week, the situation is still very chaotic — a lot of misinformation — and a lot uncertainty in some places. But the most important factor is the safety of the fans which we are not willing to compromise. As a result, for now we will have to postpone the Paris show. Please stay tuned for more info."

FIVE FINGER DEATH PUNCH canceled a show in Milan, Italy on Sunday (November 22) amidst rumors that the Islamic State (ISIS) was planning to attack the show as part of a series of multiple attacks spread across several countries.

The hacktivist group Anonymous claimed to have uncovered plots by ISIS for several terrorist attacks to occur on Sunday, including at a pro wrestling event in Atlanta and other locations in Paris, Rome, Lebanon and Indonesia, in addition to the concert in Milan.

The rumors of the attacks came a week after a deadly terrorist attack at seven locations in Paris, including an EAGLES OF DEATH METAL concert where 89 people were killed.

The hacktivists said the information about the fresh attacks was received from "several pro-(ISIS) accounts."

A number of artists halted their European treks in the wake of the Paris attacks, including FOO FIGHTERS, DEFTONES and others. 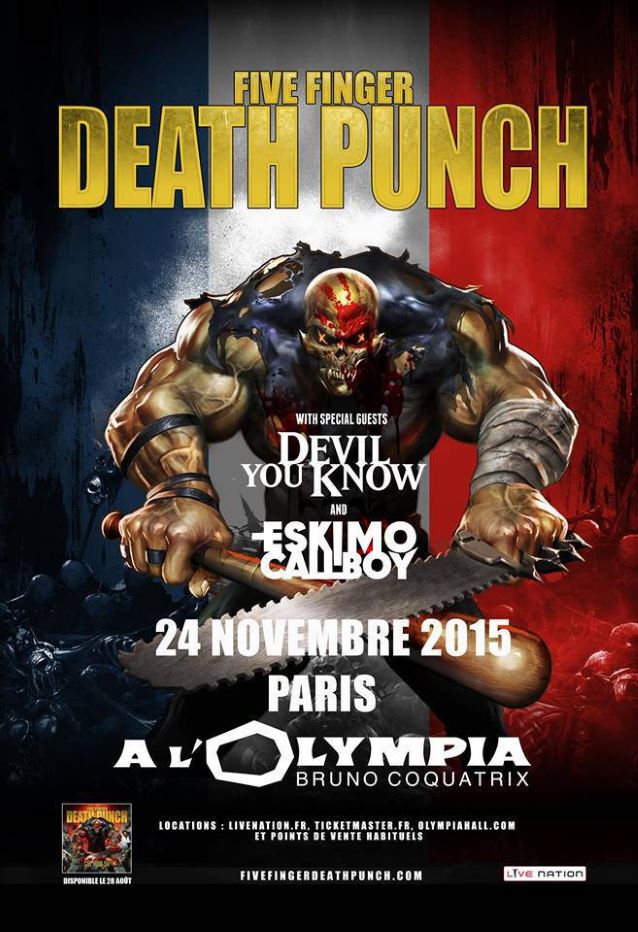