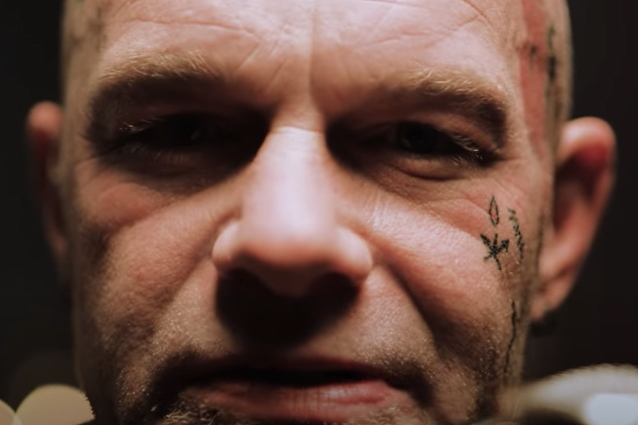 FIVE FINGER DEATH PUNCH has released the official music video for its new single, "Darkness Settles In". The track, a fan favorite taken from the band's latest studio album, "F8", was produced by the band, alongside Kevin Churko (OZZY OSBOURNE, DISTURBED). Sonically, it takes listeners on a journey, starting from a place of stripped-down rawness and eventually reaching explosive, anthemic heights, truly embodying the full emotional spectrum of the band's sound that has made them one of the top two listened-to rock bands in the world, based on sales and streaming data. The single follows in the footsteps of the album's three previously released smashes "Inside Out", "A Little Bit Off" and "Living The Dream", all of which reached No. 1 on U.S. rock radio.

The new video highlights the band's high-energy spirit that has captured millions of fans worldwide. It combines epic performance shots, showcasing the group's eagerness to get back out on the road, and an exclusive first look at footage from the upcoming horror-thriller film "The Retaliators". The track will be included on the film's original soundtrack, of which the band take center stage in an all-star tracklisting from some of the biggest names in rock. Additionally, the band will be seen starring in special cameos in the movie, due later this year.

"F8" was released in February 2020. The follow-up to 2018's "And Justice For None" capped a turbulent period for FIVE FINGER DEATH PUNCH in which singer Ivan Moody finally got sober after a near-fatal struggle with addiction, while co-founding drummer Jeremy Spencer bowed out of the band due to physical issues.

Much of "F8"'s lyrical content deals with Moody's battle with addiction, its aftermath and his recovery. The singer celebrated three years of sobriety in March.

Ivan discussed the inspiration for "Darkness Settles In" during a March 2020 interview with Andy Hall of the Des Moines, Iowa radio station Lazer 103.3. He stated at the time: "[That's] definitely one of my top three on this [album], and I'll tell you why. Anybody who's going through recovery or has been through recovery knows that we have these things called 'addict dreams' or 'drinking dreams.' I was in a deep REM [sleep] one night and I had this dream about… I grew up in Colorado near a whole bunch of railroad tracks, and I had this dream where I was sitting on these railroad ties. And it was just this glistening moon, it was beautiful — I mean, it was so vivid. And I looked over to my left, and my grandmother was sitting next to me, who, to me, was the biggest influence in my life. And she whispered something to me, and I could not tell you what it was, but it struck a chord in me, and I shook and I woke up. And the second I woke up, those lyrics came to my head — I just started penning them out in the diary I keep next to my head. And then the melody fell into line. And I didn't know where it came from, so I couldn't explain it to you — it fell in my lap. And I called Kevin [Churko, producer] and Zoltan [Bathory, FIVE FINGER guitarist] and Jason [Hook, then-FIVE FINGER guitarist] — I left 'em each a voicemail — and, actually, the first verse of that song on the CD is the voicemail I left Kevin. So it really shows how organic this record really is and the places it's come from."

Last October, FIVE FINGER DEATH PUNCH confirmed that it officially parted ways with Hook back in February 2020 during the band's sold-out European arena tour. He has since been replaced by renowned British virtuoso Andy James, who is featured on "Broken World", a song that was included on the second installment of FIVE FINGER DEATH PUNCH's greatest-hits collection, "A Decade Of Destruction - Volume 2".

The drums on "F8" were laid down by Charlie "The Engine" Engen, who made his live debut with FIVE FINGER DEATH PUNCH during its fall 2018 tour with BREAKING BENJAMIN.

FIVE FINGER DEATH PUNCH was recently announced as one of the five finalists for Top Rock Artist at this year's Billboard Music Awards. The Billboard Music Awards will broadcast live from the Microsoft Theater in Los Angeles on Sunday, May 23 at 8 p.m. ET / 5 p.m. PT on NBC. They were also announced as a nominee for Rock Artist of the Year at this year's iHeartRadio Music Awards, which air on Fox on Thursday, May 27 at 8 p.m. ET / 5 p.m. PT.