The hard rock juggernauts, comprised of vocalist Ivan Moody, guitarists Zoltan Bathory and Jason Hook, drummer Jeremy Spencer and bassist Chris Kael, formed in 2005 and have released six highly successful albums, five of which have been certified gold, with one reaching platinum status and another soon to follow.

The Portland, Oregon-based label is excited to work with the band, welcoming them to a roster that includes OF MICE & MEN, PVRIS, CROWN THE EMPIRE and more. Craig Ericson, CEO of Rise Records, says: "I'm honored to be working with one of the biggest arena rock bands in the world. I'm very confident in the future of FIVE FINGER DEATH PUNCH and Rise Records and can't wait to hear the music they make with our company."

Bathory commented: "We are looking forward to the next phase of our recording career. We have had great success with our current label, Prospect Park, and will continue to enjoy further success with our next and final album (subject to surmounting the label's court action to prevent us from recording it),after which we will commence a new and exciting label partnership with the people at Rise and BMG."

It was revealed last month that FIVE FINGER DEATH PUNCH's label, Prospect Park, filed a lawsuit against the band, accusing it of allegedly trying to violate its recording contract by rushing to make a new album despite the addiction problems of Ivan Moody.

The group fired back, calling the suit "the latest in a long line of exploitative and abusive bullying tactics used by our former manager and current label CEO Jeff Kwatinetz to extract money from and wield power against the band."

Amidst all this, FIVE FINGER DEATH PUNCH announced a new co-headlining arena tour with SHINEDOWN that will kick off on October 18 in Little Rock, Arkansas and run into December. SIXX A.M. and AS LIONS will be along as support. FIVE FINGER DEATH PUNCH will also play a handful of festival dates this summer in North America and Europe. 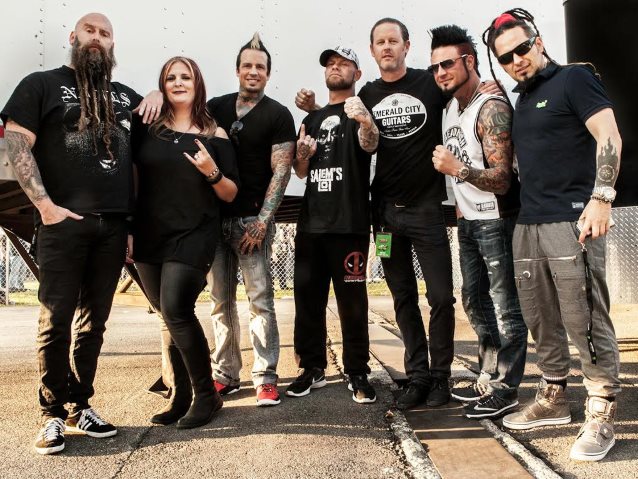