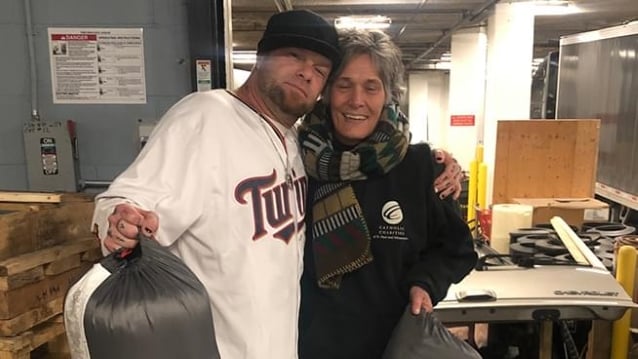 According to 93X.com, FIVE FINGER DEATH PUNCH singer Ivan Moody has helped coordinate a donation of sleeping bags to an organization that serves those in need in the Twin Cities.

After consulting with 93X Minneapolis about shelters in the area, Moody donated 50 sleeping bags to Catholic Charities Of St. Paul And Minneapolis on Tuesday afternoon — just hours before FIVE FINGER DEATH PUNCH took the stage at Target Center on a co-headlining U.S. tour with BREAKING BENJAMIN. The sleeping bags were presented to the reps of the organization before the show.

Catholic Charities Of St. Paul And Minneapolis, over its 150 years, has been one of the Twin Cities' most influential charitable organizations.

From 2012 to 2017, Catholic Charities accounted for about 12 percent of the total number of refugee resettlements in Minnesota.