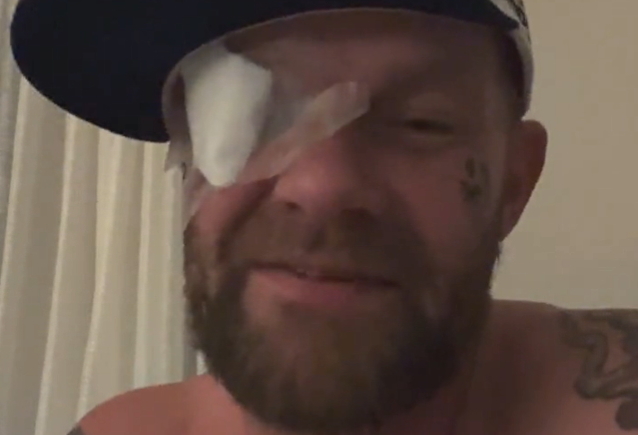 FIVE FINGER DEATH PUNCH frontman Ivan Moody injured his right eye after accidentally getting it exposed to a laser beam during the band's performance Thursday (May 19) at the Welcome To Rockville festival in Daytona Beach, Florida.

Late Thursday night, Moody took to his Instagram to share a video explaining what happened. He said in part (as transcribed by BLABBERMOUTH.NET): "During the set I got overheated, and I walked back and I passed out… I was grabbing towards Charlie's [Engen, FIVE FINGER DEATH PUNCH drummer] kit. And the heat — it was exhausting. Charlie almost passed out too. And I reached for a cymbal and I felt myself going under. And so I ran back. And I was okay. My [guys] helped me out. And as I'm coming back onstage, one of the lasers kicked backwards, 'cause I tripped basically over it, and it shot me in the eye. And these things are like… they basically have the power of a minor supernova; they're really bad. If you put your phone up to one of 'em, it'll actually black out your screen.

"So, anyway, I've gotta go back [home] to [Las] Vegas and I've gotta see a real eye doctor," he continued. "And hopefully it's okay. I can't see out of it right now. It's, like, have you ever stared at the sun or a lightbulb and you get that green light — it blackens it out. Imagine that times, like, a thousand. They thought my retina was separated; that's how bad it was.

"So when I go to Europe here in a couple of weeks, you all might be seeing me with a fucking patch on my eye," he said, referencing the fact that FIVE FINGER is scheduled to launch its European tour on June 12 at Austria's Nova Rock festival. "Go ahead. Make fun. Don't care. But it is what it is. I had a blast. Like I said, I'm really sorry. I felt like I got exhausted [during the Welcome To Rockville set] — the weight of the humidity. 85 percent humidity in 90-degree weather, it takes a toll. And I saw a lot of you falling down. And when I went to the E.R., there were a lot of you out there."

FIVE FINGER DEATH PUNCH's ninth studio album, "AfterLife", will be released on August 19. The follow-up to 2020's "F8" was once again recorded at the Hideout Recording Studio, the Las Vegas, Nevada facility owned and operated by Kevin Churko, the Canadian record producer/engineer and songwriter who has worked on all of FIVE FINGER's albums beginning with the band's sophomore release, 2009's "War Is The Answer".

Last month, FIVE FINGER DEATH PUNCH announced a 2022 U.S. headlining tour presented by Live Nation. Kicking off in Portland, Oregon on August 19, the trek will span over 30 dates, closing out on October 15 in Salt Lake City, Utah. The band will be joined on tour by rock icons MEGADETH, with additional support from THE HU and FIRE FROM THE GODS.