The current band lineup for the eighth Rocklahoma is as follows:

"I initially questioned whether or not we would be able to top last year's Rocklahoma lineup this time around," says Joe Litvag, Rocklahoma's co-executive producer for AEG Live. "But with some of the biggest names in the rock world today like KID ROCK, FIVE FINGER DEATH PUNCH, SEETHER and DEFTONES playing alongside Rocklahoma legends like TWISTED SISTER, JACKYL, Tom Keifer of CINDERELLA and KIX, there is not a doubt in my mind that we just raised the bar! Memorial Day Weekend will never be the same!"

Dee Snider of TWISTED SISTER explains, "I view this festival as sort of a 'Royal Rumble' of rock; it's every band for itself, each trying to claim the belt. When TWISTED SISTER is done that night, the promoters are going to need to change the name of the event to 'I Wanna Rocklahoma'!"

One of the most unique parts of the Rocklahoma experience is the campgrounds. With an endless party running non-stop for four days, it's an experience not to be missed! Campingtickets may be purchased at www.rocklahoma.com, by calling the Rocklahoma Camping Office at (866) 310-2288 or emailing [email protected] Campgrounds open on Sunday, May 18 and will remain open through Tuesday, May 27.

Established in 2007 as a classic rock destination festival with the motto "Life, Liberty and the Pursuit of Rock," Rocklahoma was revamped in 2010 as organizers teamed with AEG Live to create an event encompassing a much broader mix of classic, current and up-and-coming rock artists. In 2012, a national television audience was able to experience many Rocklahoma band performances in HD when AXS TV aired live coverage of the festival. 2013 saw record crowds when over 50,000 fans turned out for Rocklahoma. The festival remains committed to its community, and to date, the festival has raised over $150,000 for local tornado relief efforts. 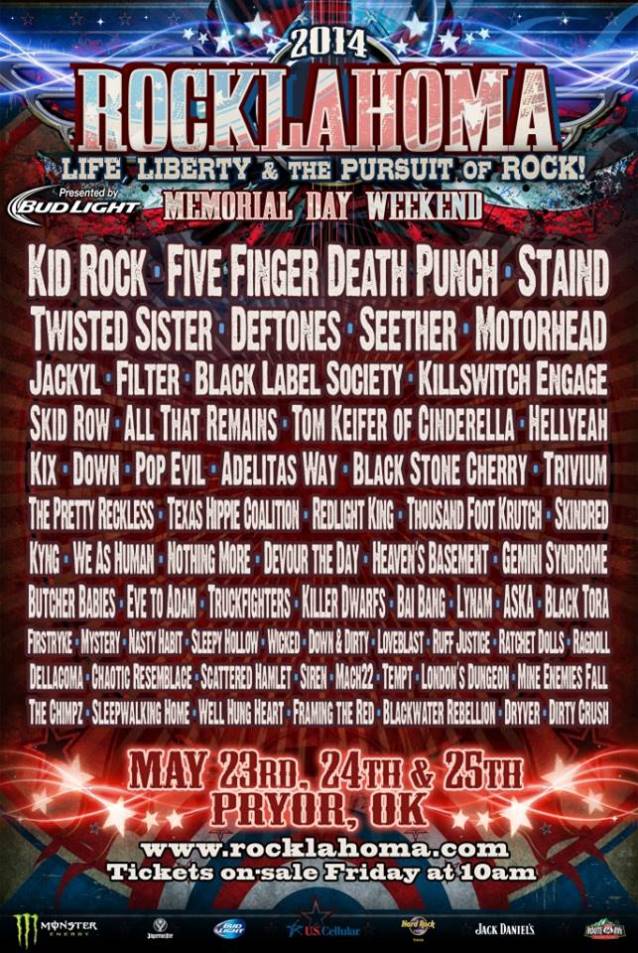