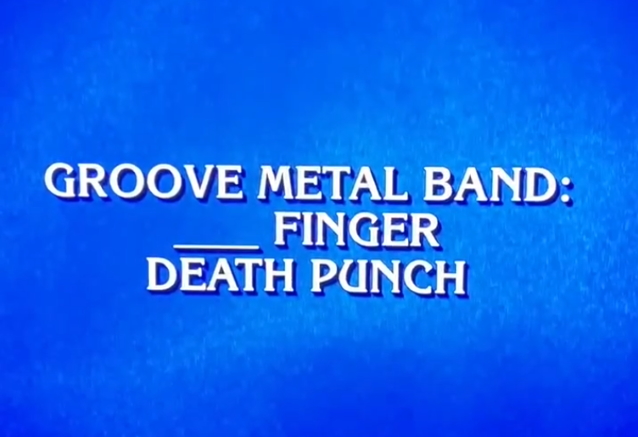 A question about FIVE FINGER DEATH PUNCH was included in tonight's (Wednesday, September 15) episode of the long-running game show "Jeopardy!"

In the category "Numerical Entertainment", contestants were given the clue "Groove metal band: ___ FINGER DEATH PUNCH" by host Mike Richards.

A contestant guessed the correct question — "What's Five?" — without wasting a single second.

FIVE FINGER DEATH PUNCH performed for the first time in a year and a half on August 20 at the Iowa State Fair in Des Moines, Iowa.

The band recently entered the Hideout Recording Studio in Las Vegas, Nevada to begin recording its new album for a 2022 release. In addition, FIVE FINGER DEATH PUNCH has commenced re-recording its debut LP, 2007's "The Way Of The Fist", for its 15th anniversary.

FIVE FINGER DEATH PUNCH's upcoming album will be the group's first with its latest addition, renowned British virtuoso Andy James, who replaced Jason Hook last year. James was previously featured on "Broken World", a song that was included on the second installment of FIVE FINGER DEATH PUNCH's greatest-hits collection, "A Decade Of Destruction - Volume 2", which came out last fall.