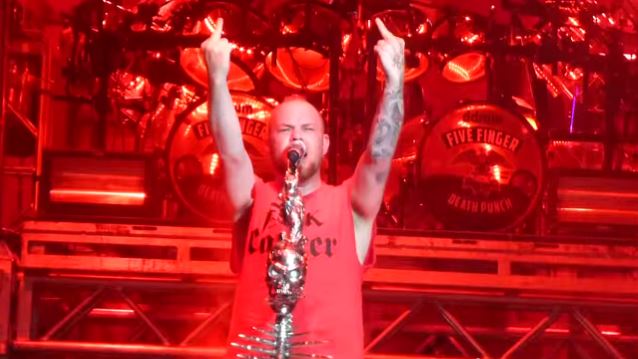 The official lyric video for the song "Watch You Bleed" from Las Vegas metallers FIVE FINGER DEATH PUNCH can be seen below. The track is taken from the band's fourth studio album, "The Wrong Side Of Heaven And The Righteous Side Of Hell Volume 1", which sold around 112,000 copies in the United States in its first week of release to land at position No. 2 on The Billboard 200 chart. The record arrived in stores on July 30, 2013 via Prospect Park.

"The Wrong Side Of Heaven And The Righteous Side Of Hell Volume 1" was the first half of a two-record set, with the second half arriving last November. Guitarist Zoltan Bathory told The Pulse Of Radio that the idea for a two-record set surfaced after the band finished its writing sessions for the project with around 25 songs. "Generally you pick your best 12 and the rest of them become bonus tracks and this and that, or you keep it for next record, whatever," he said. "But you know, when we tried to take away songs, we realized, no, no, no, we don't want to take this one or that one. And when we went to the label, they said the same thing: 'Well, keep 11.' And so we were like, 'OK, well, here's 25, you pick it,' and they couldn't pick it either. So we were like, 'OK, now this is gonna be a double record.' That's how pretty much that happened."

The deluxe edition of "The Wrong Side Of Heaven And The Righteous Side Of Hell Volume 1" came with a bonus 15-track live CD titled "Purgatory (Tales From The Pit)", plus a redeemable limited-edition T-shirt.

FIVE FINGER DEATH PUNCH and VOLBEAT will embark on a co-headlining tour, which kicks off on September 16 in Salt Lake City and runs through October 24 in Las Vegas. Support on the trek will come from HELLYEAH and NOTHING MORE.

Bathory told Billboard that FIVE FINGER DEATH PUNCH already has "five, six ideas" for songs for its next album, which he would like to see released by the summer of 2015. Bathory explained, "In this environment I don't think that bands can allow themselves to stay in a studio for two, three, four years and wait and try to write some masterpiece."