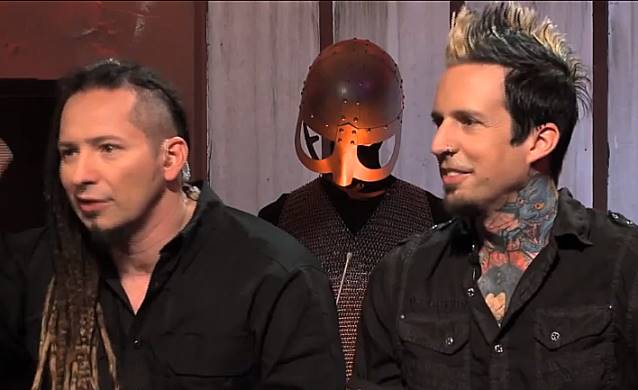 FIVE FINGER DEATH PUNCH guitarist Zoltan Bathory and drummer Jeremy Spencer were interviewed on a recent episode of the French show "Une Dose 2 Metal" on L'Enôrme TV. You can now watch the entire chat below.

FIVE FINGER DEATH PUNCH selected its surprising cover of the classic folk song "The House Of The Rising Sun" as the next single from the band's recently released album, "The Wrong Side Of Heaven And The Righteous Side Of Hell Volume 2". The disc came out on November 19, 2013 and is the second half of a two-record set, with "Volume 1" coming out in July 2013.

"We had the idea to do this for a while," explained Zoltan Bathory. "The interesting thing about this song is that [it's] actually in a time signature of 6/8 which is a waltz… and rock music and waltz doesn't necessarily mix right."