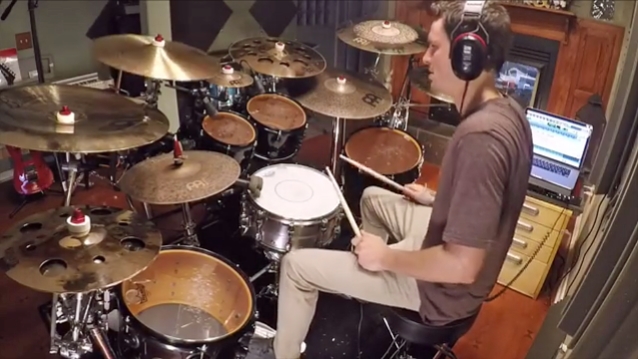 FIVE FINGER DEATH PUNCH has tapped Charlie Engen to play drums for the group on the fall leg of its tour with BREAKING BENJAMIN. Engen is filling in for FIVE FINGER DEATH PUNCH's founding drummer Jeremy Spencer, who is sitting out the trek to undergo a second back surgery for an undisclosed condition.

The 33-year-old Engen, who was previously identified only as "a drum prodigy" called "The Engine", played his first show with FIVE FINGER DEATH PUNCH on November 6 in Wichita, Kansas. The tour will end on December 11 in Portland, Maine.

The Saint Paul, Minnesota-based Engen has been teaching drums for more than 15 years and currently offers private and Skype lessons at his home studio, along with playing in the bands SCALE THE SUMMIT and IDEOLOGY.

Says Charlie in the bio section of his official web site: "Receiving a drum set for my second birthday, drums have been my main passion in life for as long as I can remember. Going to McNally Smith College Of Music for my masters degrees in percussion performance, I have focused on creating my own playing style combining elements of progressive metal, funk, Latin, and East African rhythms. My goal is to utilize the many different approaches and rhythmic tools to bring my percussive voice to its optimum level. I continue to push my own physical limitations daily, and hope that my playing style represents these concepts in a unique and musical way."

Fan-filmed video footage of FIVE FINGER DEATH PUNCH's second concert with Engen, which took place on November 7 at Broadmoor World Arena in Colorado Springs, Colorado, can be seen below.