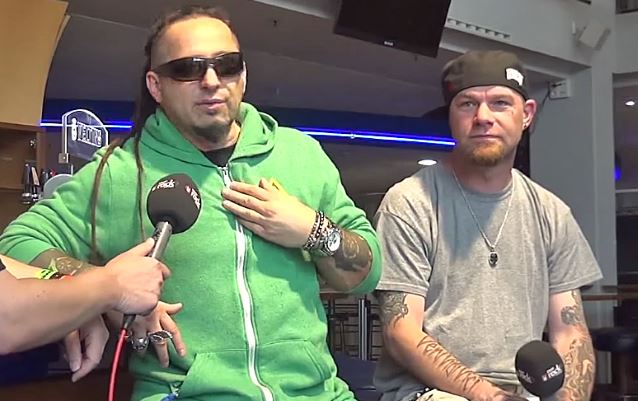 FIVE FINGER DEATH PUNCH's IVAN MOODY On 'Got Your Six': 'We Wanted To Show The World That We're Not Going Anywhere'

Ivan: "[It's] absolutely the best work we've done so far. Hands down. And I'm not taking away from any of the previous albums, but we really put our hearts into this one."

On whether "Got Your Six" retains the diversity of FIVE FINGER DEATH PUNCH's double album "The Wrong Side Of Heaven And The Righteous Side Of Hell":

Zoltan: "Actually, this one, I would say, it's more focused in a specific area. I mean, we usually try to make diverse records, and this one, everybody just came into the studio with this high of… The last few records were extremely successful, and we were in a really good mood — we just came off a really successful arena tour in the U.S. — so, I guess, that energy carried into the studio, because every song is kind of uptempo. So it's a faster… Obviously, we're not a death metal band, so it's not fast in those terms, but, you know, for us, it's a faster, more energetic record."

Ivan: "It's got power grooves, and it really just moves on you, you know what I'm saying? And it never really stops. We stayed away from doing ballads on this one; we kind of wanted to get back to our metal roots. And yeah, dude, it's the heaviest thing, I think, we've done yet."

On whether "Got Your Six" features any guest musicians:

Ivan: "No, we stayed away from that. And we also decided we weren't gonna do any covers on this album. We just wanted to get back to our roots and what brought us into music. This was all about us. Not to sound conceited, but we wanted to show the world that we're not going anywhere."

"Got Your Six" will be released worldwide on September 4 via Prospect Park Records in North America and Eleven Seven Music internationally.