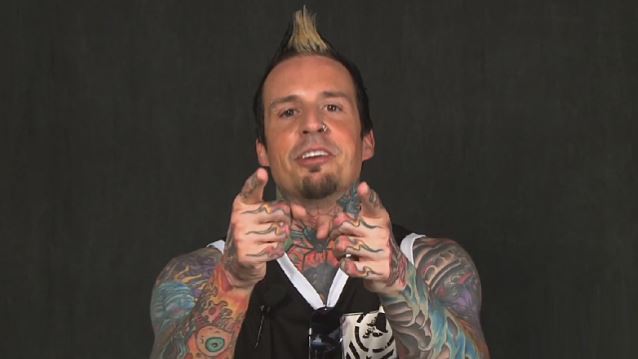 FIVE FINGER DEATH PUNCH's Jeremy Spencer says that Lars Ulrich was a huge influence on him as a drummer and credits the METALLICA sticksman for inspiring him to play double bass.

Spencer, 42, started playing drums at age six on a drum set his grandmother purchased at Sears. After high school, he moved to Los Angeles, where he met BULLETBOYS guitarist Mick Sweda. After spending a few years in various bands and projects, it was a fateful online discovery that would help spawn the beginnings of FIVE FINGER DEATH PUNCH.

During an appearance on a recent edition of the "Metal Hammer Magazine Show", Spencer stated about METALLICA: "['Master Of Puppets' is] definitely my favorite, probably, metal album ever. It's gotta be top two for sure. It's a toss-up between that and… I actually like 'South Of Heaven' by SLAYER too. But when I first heard 'Master Of Puppets', man, the drumming and the double bass, I never heard anything like that before as a young kid. It made such an impression on me that I just kind of wanted to do all things double bass. There's some really fast moments in 'Damage Inc.', and it just stuck with me and made such an impression on me as a drummer when I was younger; I instantly fell in love with it."

Asked what was so special about "Master Of Puppets" in particular, Spencer said: "I think they blended… They kind of had some European melody going on in the guitars, especially in the early records. That was different. But it was just… It was a different beast at that time; nothing sounded like it. There was an energy coming from that, and I think the riffs and the arrangements of the songs, it made such an impression on me and on so many other people."

Regarding how much of an impact late METALLICA bassist Cliff Burton's contributions had on the way "Master Of Puppets" turned out, Spencer said: "I really don't know, but, obviously, he had some serious influence on them, 'cause their sound drastically changed [after his death]. But I love it. I think the first three records are incredible, to me."

FIVE FINGER DEATH PUNCH's sixth album, "Got Your Six", will be released on August 28 through Prospect Park in North America and Eleven Seven Music outside North America.