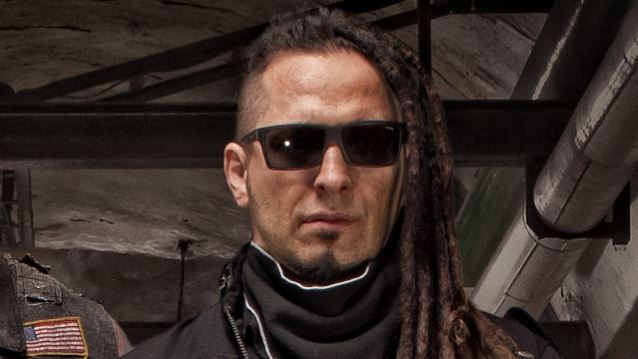 FIVE FINGER DEATH PUNCH guitarist Zoltan Bathory says that the band's onstage meltdown at the Beale Street Music Festival in Memphis, Tennessee "had to happen" in order to avert "a bigger catastrophe."

According to multiple reports, the group performed half a dozen songs on May 1 before the entire band, except vocalist Ivan Moody, walked off stage, leaving the singer seemingly confused and talking to fans in rambling fashion.

During an appearance on today's (Tuesday, September 29) edition of the "SiriusXM Fight Club", Bathory stated about the incident (hear audio below): "The band is [composed of] very strong personalities and very strong entities. Every single person in this band has their own… you know, alpha personality. And Ivan, our lead singer, he's a party animal, or used to be a party animal. Right now, he's much better than he used to be. He used to have problems with alcohol, because it's just so easy. Every town we go to, every concert [we put on], every party we go to, people [are like], 'Hey, let's come and party.' They don't realize that this happened yesterday, and the day before that, and four years before that every day. So sooner or later, that will catch up to you. And Ivan was pretty much down on that slope at the time, and I saw that happening. Add a little alcohol, add a little bit of technical difficulties — which happens all the time, in festival settings especially — and things were going sideways."

He continued: "I could have stepped in to say, 'Guys, stop the crazy stuff.' But I kind of just wanted to see the slow-motion car crash myself. I just stood on the side of the stage and [was] like, 'Okay, let's see where this is going.' And I think it had to happen. I think he had to sort of wake up, sort of hit the wall. And it wasn't lethal; it wasn't something like… If he was jumping in a car, trying to drive, I would have stopped him. But this wasn't something that was gonna hurt him. It was something that I felt… It had to happen in order to avoid a bigger catastrophe later. So this whole thing unfolded, and then finally he pissed off everybody in the band and everybody walked off stage and he was up there alone. I think, at that moment, he realized this is band. Without your band, without your unit, without your team, you're nothing. Nobody's bigger than the band. The band is bigger than any of us separately. That's what makes a good band. And the sum of all of us is something more than we are individually."

In an interview wih Metal Hammer magazine, Moody admitted that he and FIVE FINGER drummer Jeremy Spencer had been arguing beforehand, saying, "We were both being human. It just sucked that I had my microphone in my hand. The saying is that you should wash your clothes at home. Unfortunately, there were 20,000 people watching while he and I had an argument. I really fucked up and I was so embarrassed. The fans didn't have to see that."

Moody added: "I'll be honest, it hurt. I love the guy. He's one of my best friends, and, yeah, we fucked up. It's humiliating."

Spencer chimed in as well, recalling, "Our wireless packs were having all kinds of interference and we started getting a little frustrated with that. Then Ivan lost his cool completely and just started taking it out on everyone, including me. He and I got into a little scrap and it just wasn't cool. We got through it, but it was pretty ugly and it was unprofessional."

Both musicians insisted that the band was in no danger of splitting up, with Spencer saying, "We've been together 10 years now, so it's like a marriage — some days are better than others, but we love and respect each other."

FIVE FINGER DEATH PUNCH guitarist Jason Hook confirmed in a recent interview that alcohol played a role in the incident, revealing, "For whatever reason Ivan decided to get shitfaced drunk — I'm probably not supposed to be talking about this — but he started to lose his temper onstage towards, basically, the rest of us, being the band… Jeremy decided that he had enough and he got up and left. Well, it's pretty hard to play a concert without the drummer."

FIVE FINGER DEATH PUNCH's sixth album, "Got Your Six", came out on September 4.

"SiriusXM Fight Club" airs Mondays-Thursdays on SiriusXM RUSH 93 and the SiriusXM app. The official Twitter handle of the show is @MMAonSiriusXM.