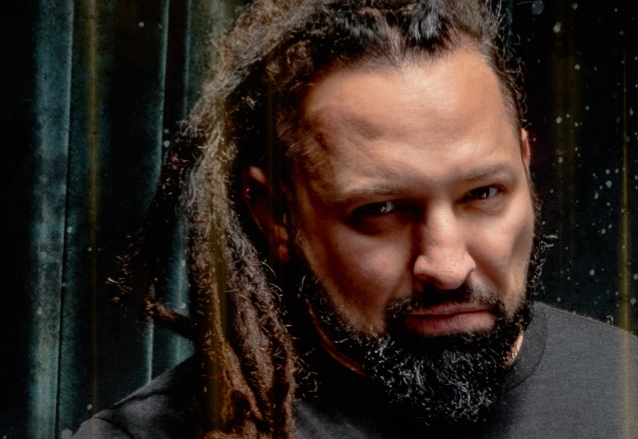 FIVE FINGER DEATH PUNCH's ZOLTAN BATHORY On Coronavirus Pandemic: 'This Will Be Over'

FIVE FINGER DEATH PUNCH guitarist Zoltan Bathory has shared advice on how to deal with the coronavirus pandemic. Speaking to "Offstage With DWP", the Hungarian-born musician, who currently resides in Las Vegas, said (see video below): "This will be over. Life will return to normal.

"Now, if you look at the history of this planet, the things we survived as humans — much bigger, much worse," he explained. "Two world wars and all the wars leading up to it; the bubonic plague, all kinds of crazy stuff. We lived, we survived, we're here. This will pass. This will end.

"Humans are hard to kill, man. That's what it is."

Bathory added: "As an individual, remember, for you to be here today, you have to look at bloodlines. For you, personally, to be here today, that means every single ancestor of yours had to win a battle, had to survive a battle, had to survive the plague, all kinds of sicknesses, and kept surviving and surviving. So your grandfather's grandfather's grandfather, who was maybe a Viking warrior, came home from the battle, and then his son came home from the battle, and then his son and daughter survived the sickness and all the crazy things that happened on the planet. So you are here today. That means your bloodline is the bloodline of the survivors, or you would not be here. So you are a winner. Throughout this entire human race and its evolutionary [steps] and the social revolution, whoever you are, wherever you are in the world, because you are here today, that means all your ancestors were winners, or you wouldn't be here. The loser died. So remember that. And if you look at the world from that perspective, then you get a totally different idea about life and survival… And if you look at life that way, then this idea of losers and winners goes away. Everybody who is alive today is a winner. In the worst-case scenario, you're still a winner because somehow, somehow your bloodline didn't die — it's here today. You have to take on this, whatever is happening right now, as a challenge.

"This stupid coronavirus thing. You have to take it, whatever happens and the effects of it, whatever comes up, you have to [face] it with the attitude that I'm gonna beat whatever comes to me. If it's the virus, then you beat that. If it's a circumstance that it created — the economy circumstance. The effect, the ripple effect. Like, we can't tour right now. So how many people in this touring world, all the people who work in the [live] entertainment world are out of jobs — out of jobs for a long time. It's gonna take some time. But still, as I said, a lot of bad things happened in the world, and you're here — you somehow survived. So you have to regain that confidence.

"The reason I'm talking about this aspect is I see how this whole thing affects most people psychologically — it's breaking them down. And as I'm seeing it when I'm talking to the people, I noticed that that will have to be addressed. The economy fallout is one thing, but that will create this ripple effect psychologically. And I started to see that."

FIVE FINGER DEATH PUNCH's eighth album, "F8", came out in February via Better Noise Music. The follow-up to 2018's "And Justice For None" capped a turbulent period for FIVE FINGER DEATH PUNCH in which singer Ivan Moody finally got sober after a near-fatal struggle with addiction, while co-founding drummer Jeremy Spencer bowed out of the band due to physical issues.