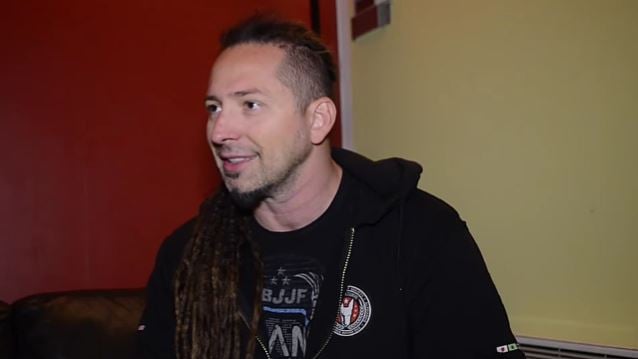 TV Rock Live conducted an interview with FIVE FINGER DEATH PUNCH guitarist Zoltan Bathory on June 17 in Paris, France. You can now watch the chat below.

Asked about the inspiration for the lyrical themes covered on FIVE FINGER DEATH PUNCH's new album, "Got Your Six", Zoltan said: "Ivan [Moody, FIVE FINGER DEATH PUNCH lead singer] is the lyricist. Everybody has bits and pieces we all contribute and give him ideas. And because the songs are usually [musically] done, when we give him a song [to write melodies and lyrics to], sometimes he asks, 'What were you thinking when you wrote this?' But that's his therapy. Ivan writes his soul out in his lyrics; that's his… you know, therapy, I guess… He's Jekyll and Hyde. He's that guy. One day he's your best friend, another day he's Hurricane Ivan, Category 5. He's a hand grenade with a loose pin. So he creates his own hell, so to speak. He has a very chaotic life, and I guess it's come from… Any kind of rule you try to impose on him… A schedule — just a simple schedule — he just has to break it. I don't remember the last time he actually didn't miss an airplane. In ten years, I just don't remember a single time that he could catch the airplane he was originally scheduled to make, because he has this… some kind of inner chaos that [he] just has to break the rules — whatever rules it is. So, in one way, I don't understand, because I'm a very methodical kind of guy. And that's why we have this weird relationship. I'm fascinated by this — that how even he survives, you know — and I think it's a necessity that a lead singer is absolutely crazy. But I don't understand."

"Got Your Six" arrived on September 4 and debuted at No. 2 on The Billboard 200 album chart.

Each one of the first four FIVE FINGER albums has been certified gold in the U.S. for sales of 500,000 copies or more.

FIVE FINGER DEATH PUNCH earlier in the month launched a co-headlining fall tour with PAPA ROACH. The trek kicked off on September 4 in Lexington, Kentucky, and will wind down on October 9 in Glen Falls, New York. Also along are IN THIS MOMENT and FROM ASHES TO NEW.