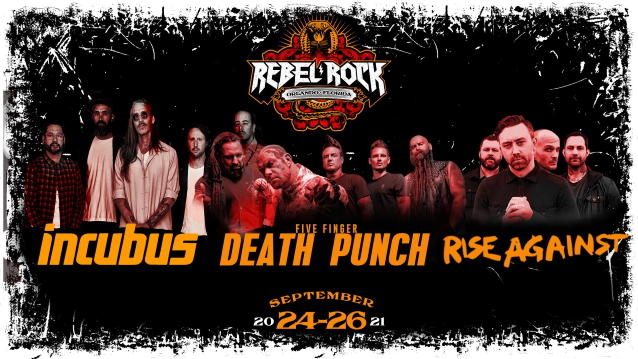 "After this week's severe weather and despite our crew's effort to improve the ground conditions around the Main Stage over the last three days, our venue partner has deemed the area unfit for artists, crews, vendors, and fans. We were able to get in the Taco Metal Party on Thursday by using the B-Main grounds while continuing to work on the conditions of the Main Stage grounds. The amount of water dropped this week simply proved to be too much to clear to provide you a safe festival environment and experience. We can't tell you how heartbreaking it is to see two years of work be tackled by mother nature.

"We'll share more information about refunds as soon as possible."

In the last few weeks, Rebel Rock was forced to reshuffle its lineup following several high-profile cancelations. INCUBUS, which was stepping in for original headliners LIMP BIZKIT, announced on Tuesday that it was dropping out of the festival due to COVID-19 concerns. LIMP BIZKIT called off its entire tour shortly after playing at the Lollapalooza festival this summer. Other acts which pulled out of the four-day festival at the Central Florida Fairgrounds included DEVILDRIVER, LIGHT THE TORCH and EMMURE. VOLBEAT were forced to cancel its set due to issues getting into the U.S.

STATEMENT: We are deeply and utterly devastated to announce the cancellation of this weekend's Rebel Rock...