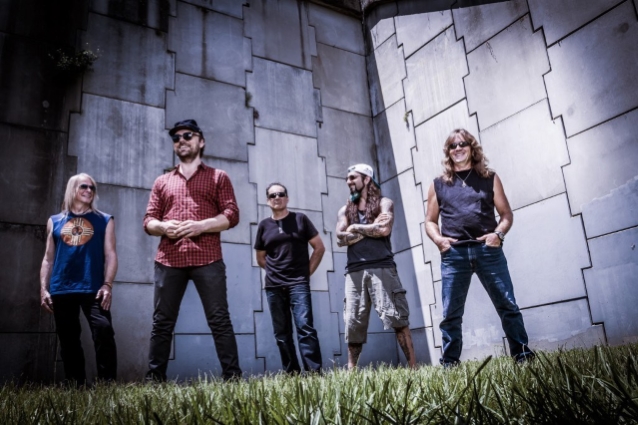 FLYING COLORS was originally assembled by executive producer Bill Evans, who hoped to curate a band that combined virtuoso musicians and complex musicianship with a pop singer and accessible songwriting. The group's 2012 self-titled debut, produced by Peter Collins (RUSH, QUEENSRŸCHE),was supported by an 11-date, six-country European tour, as well as shows in Los Angeles and New York City. A performance in Tilburg, Holland was recorded for the 2013 live album/Blu-ray/DVD "Live In Europe".

2014's "Second Coming" saw the group play another limited engagement-style tour, during which it performed three shows in America before doing a week's worth of European dates. A concert in Pratteln, Switzerland was filmed and released as the 2015 live album/Blu-ray/DVD "Second Flight: Live At The Z7".

In 2017, the group performed a surprise set aboard the prog-themed Cruise To The Edge as part of Portnoy's 50th-birthday performance. Later that year, the band self-released a "raw" version of its first record, "True Colors", which included unmastered versions of the album's material as originally recorded by Grammy Award-winning mixing engineer Michael Brauer (COLDPLAY, John Mayer).

FLYING COLORS made another surprise appearance during this year's Cruise To The Edge, when the group reunited to perform four songs as part of Portnoy's "Mike Portnoy & Friends" set.

Due to Morse's ongoing touring commitments with DEEP PURPLE, FLYING COLORS will perform just 10 shows in support of "Third Degree" — five in America, four as-yet-announced concerts in Europe and another appearance on Cruise To The Edge in 2020. The U.S. dates are as follows: