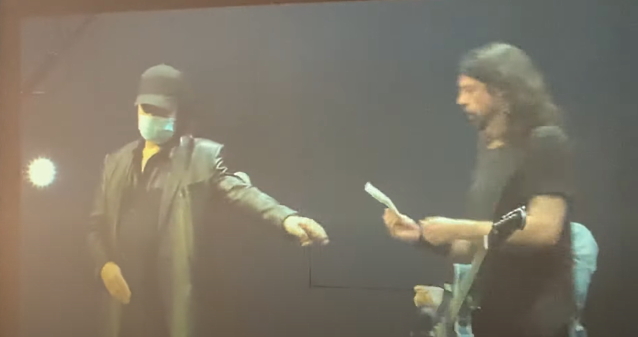 After FOO FIGHTERS frontman Dave Grohl called out a fan near the front who bore a resemblance to the KISS bassist/vocalist, Dave addressed the real Simmons, standing off stage right. Simmons, wearing a face mask, walked out and waved to the crowd and apparently handed Grohl a bill as a token of his gratitude.

After Simmons left the stage, Grohl told the crowd, "All right. We've got a rock show now… Listen, Gene Simmons — legendary bass player. I had posters of that motherfucker on my wall when I was a kid. Hold on, let me rephrase that — I still have posters of Gene Simmons on my fucking wall at home."

Simmons mentioned his appreciation for the FOO FIGHTERS during an interview a year ago with Gulf News. While doubling down on his claim that the rock genre was "finally dead," he said: "Rock is dead. And that's because new bands haven't taken the time to create glamor, excitement and epic stuff. I mean, FOO FIGHTERS is a terrific band, but that's a 20-year-old band."

Back in 2014, Gene's KISS bandmate Paul Stanley told Rolling Stone that he was also a FOO FIGHTERS fan. It's funny, there were times that I would hear music on the radio — just something great — and not know who it was and very often it was FOO FIGHTERS. It's incredible to think of somebody coming out from behind the drums [with NIRVANA] with such a full concept as Dave has had and create music. I mean, the first FOO FIGHTERS album, that's just Dave. So the template and everything he's been working from is bigger than anyone expected from the guy who was just viewed as the drummer of NIRVANA."

Earlier this week, Grohl and producer Greg Kurstin wrapped up the eight-part second year of their "Hanukkah Sessions" series with a rendition of KISS's "Rock And Roll All Nite". For the accompanying video, Grohl and Kurstin painted their faces in full KISS makeup.

A few years ago, Grohl told The Pulse Of Radio how he got to know Stanley outside of the music business. "I see Paul Stanley every morning at drop-off 'cause our kids go to school with each other," Dave said at the time. "Paul is not only a great dude, but a great dad. He's there at 7:30 every morning with his kid and it's the greatest — I mean, it's inspiring. Like, of course, I love KISS and I'm inspired by him as a musician, but when I see him being, like, a dude — being a dad — it's like, that's the coolest thing in the world to me."

Backstage with the ⁦@foofighters⁩ right before they royally rocked the house last night in Vegas. Fun stuff. And, I can’t say enough about their commitment and authenticity to the fans. Inspiring! pic.twitter.com/mo2PBRN9Up

See if you can guess who this powerful and attractive man is… pic.twitter.com/crhXym19gi