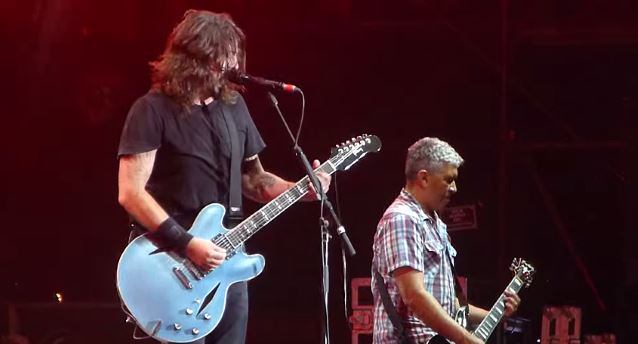 According to The Pulse Of Radio, FOO FIGHTERS are getting ready to play epic three-hour-plus shows on their 2015 tour, the band tells News.com.au. Guitarist Pat Smear said, "I like playing until they're done. Dave [Grohl, frontman] can tell, he's got this connection with the crowd that inspires them. If he wasn't up there being that crazy inspirational guy, the crowd wouldn't be the same and it goes back and forth, back and forth. I think you can tell when this crowd is done with us."

The FOO FIGHTERS started playing marathon gigs back in 2011 and drummer Taylor Hawkins told The Pulse Of Radio at the time that he wasn't sure how long the exhausting performances could continue. "It's a lot," he said. "I don't know how long we can keep that up. We'll see. I don't know how long Dave's gonna be able to sing for three hours every night when we get onstage. It's awesome and it's fun and it's the macho trip a little bit, and people get their money's worth, that's for damn sure."

Grohl said that he knows when it's time to leave the stage because "it's usually just when my ankles start hurting."

Guitarist Chris Shiflett concurred, saying they all know it's quitting time when "you are thinking about your lower back hurting and not the song you're playing."

The band will hit the road in 2015 in support of its recently released eighth album, "Sonic Highways".