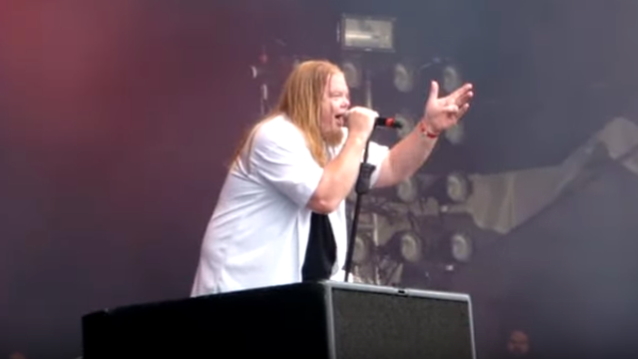 FORBIDDEN singer Russ Anderson disclosed earlier on Friday that he entered a rehabilitation facility six months ago, saying he had hit "rock bottom" after "drinking heavily" most of his life.

"October of last year I was put into a rehab and alcohol abuse center after drinking heavily most of my life. This was made possible by [FORBIDDEN guitarist] Craig Locicero and [drummer] Mark Hernandez kicking my ass and picking me up off of rock bottom. Between those guys and a few other amazing people that know who they are, I'm here today and not something much worse. Thanks to all of them and my counselors who helped coach me through the hardest time in my life.

"I'm here to tell all my friends in bands that I'm on my way back now.

I can still remember David Vincent from MORBID ANGEL saying (in a helpful way) to stop smoking and drinking. To be 'the guy' that did the first couple of FORBIDDEN albums! Another time, Matt Barlow from ICED EARTH told me I was his mentor as I was sitting there slamming my second bottle of Jack Daniels. Then I watched him go out there and blow doors!

"I can't tell you how much I regret I have about my choices the last few years with FORBIDDEN.

"Now, I have been clean going on 170 days with one slip up. An wrong turn on my long road to sobriety.

"There are actually some amazing things that have happened to me since I went into rehab. I've lost 119 pounds and now feel like screaming! I'm up for wherever the journey takes me.

"I also need to say that my heart goes out to Jason Rainey, his family and the guys from SACRED REICH. It was back in the thrash metal heyday. They were the first band that FORBIDDEN ever toured and shared a bus with. The news about Jason hit me hard. Such a sad thing to loose the friends and bandmates we've made over those years. I'm teary eyed just thinking about it. We know how that feels. FORBIDDEN also lost Tim Calvert.

"Thanks to our fans that continue to support FORBIDDEN after all these years. It keeps me and our legacy going."

Back in July 2012, Locicero announced that Anderson had stepped away from FORBIDDEN "to take a break from the music business." At the time, Craig said that Russ was "not quitting" the band, adding that the singer needed "to do this for himself." Locicero explained: "Russ simply needs to recharge his thrash metal batteries."

FORBIDDEN's last album, "Omega Wave", was released in October 2010 via Nuclear Blast Records. The CD landed at position No. 27 on the Top New Artist Albums (Heatseekers) chart, which lists the best-selling albums by new and developing artists, defined as those who have never appeared in the Top 100 of The Billboard 200.

To my fans and friends. Yes, I'm still alive!

October of last year I was put into a rehab and alcohol...