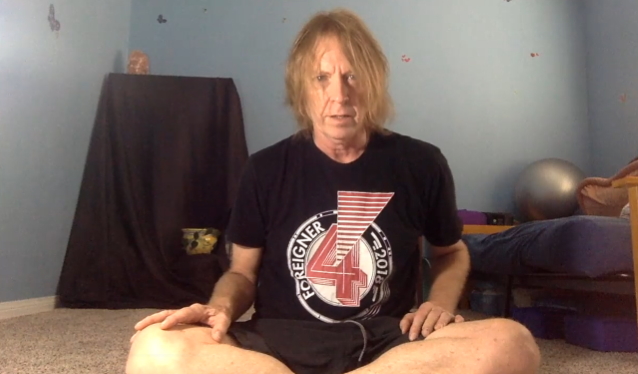 Former DOKKEN and current FOREIGNER bassist Jeff Pilson, who recently revealed that he was working on a yoga book, discussed the popular form of exercise and stress management during a recent appearance on "Waste Some Time With Jason Green". He said (as transcribed by BLABBERMOUTH.NET): "I've been doing yoga since 1978. And I started doing yoga because I hurt my back really bad and I made a vow to myself that I was gonna do something to help it. That was then; that was many years ago. And I've just done it since, and I've become very serious about it. And meditation has become an integral part of my life. The centering factor, the calming factor, helping with concentration and focus, meditation has become very, very important to me. I still do the yoga postures and stretches, but the meditation is my main focus.

"During the pandemic… My wife runs a yoga studio, and she had to go virtual almost right away," he continued. "So when she did that, we decided, 'Well, I'm gonna try doing a virtual meditation class.' And it's been great fun. So every Monday night, at 5 p.m. Pacific, 8 p.m. Eastern, I've been doing a virtual half-hour meditation class. And it's just been really rewarding for me, both for my own practice and for helping others.

"Incorporating yoga into your life is only a positive thing. And with this pandemic, there's a lot of reason to need the introspection that comes out of that. I think a lot of people faced levels of depression that they hadn't really experienced because it was so different, and I know the meditation can be of help. I know I was experiencing feelings that the meditation really helped. And it gives you perspective.

"So if you can, go to [the Hot For Yoga web site], and that is where you will find all the information about how to take the meditation class or to take other virtual classes, because you get a virtual pass," Jeff added. "There's virtual Pilates — I do that twice a week — there's virtual Bikram Yoga, there's virtual Yin Yoga, which is a very calming yoga, and then there's my meditation. So lots to pick from, it's very reasonable, and it's well worth doing. So, if you can, check that out."

Last mont, Pilson told Kylie Olsson's YouTube show "Life In Six Strings" about his upcoming book: "There's a little bit of autobiographical material in it, but I don't think I'm enough of a superstar for anybody to really be interested in my life. I think I'm just being realistic. I feel it would be presumptious to think people would be all that interested in my life. [Laughs] Maybe 10 people would. [Laughs] My family. Some of these [musical] projects I do, who knows if more than 10 people are even listening? [Laughs]"

Jeff went on to say that he is just about "halfway though" writing the book and he has yet to secure a publisher for it. "I do have an editor that has been helping me out immensely, so when the time comes, I'll have something at least legitimate to give them to read," he explained. "But I'm not in any hurry. This is the kind of stuff that the post-touring life is gonna use a little more of. So I'm just working towards that."

Pilson is best known for playing with DOKKEN and FOREIGNER, but he also toured with DIO in the 1990s and performed on three of the group's albums — "Strange Highways" (1993),"Angry Machines" (1996) and the group's tenth and final studio release, "Master Of The Moon" (2004).