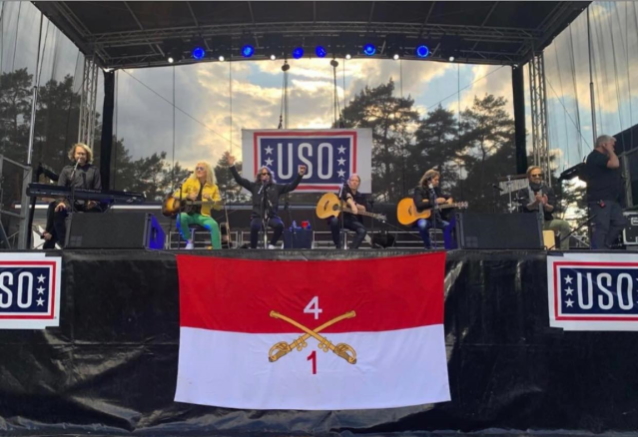 Last week, FOREIGNER was proud to be the first band to perform USO events for our troops in Eastern Europe since the Russian invasion of Ukraine. The band was treated to opportunities to visit with the fine men and women of the U.S. military, and even experience firsthand some of the armored vehicles deployed at the bases.

Said FOREIGNER lead singer Kelly Hansen: "We always welcome the opportunity to perform for the awesome troops of the U.S. military. I'm not at liberty to say where we performed, but these warriors are having a very beneficial impact on the Ukrainian situation and we thank them for their dedication and devotion to safety, security, and democracy."

This visit comes on the heels of FOREIGNER's recent April 2022 $100,000 fundraising milestone in support of the American Red Cross Ukrainian relief efforts during their Las Vegas Residency at The Venetian Resort. During their exclusive three-week sold-out heading residency, FOREIGNER donated proceeds from each show to the American Red Cross, and also provided hand-signed guitars to concertgoers who joined them in the initiative by donating $1,000 or more to this meaningful initiative.

Responsible for some of rock and roll's most enduring anthems, including "Juke Box Hero", "Cold As Ice", "Hot Blooded", "Waiting For A Girl Like You", "Feels Like The First Time", "Urgent", "Head Games", "Say You Will", "Dirty White Boy", "Long, Long Way From Home" and the worldwide No. 1 hit "I Want To Know What Love Is", FOREIGNER still rocks the charts more than 40 years into the game with massive airplay and continued Billboard Top 200 album success.

Did you know USO has been hosting shows for Service Members since the U.S. entered World...

Comment below and let us know! Our Soldiers had a...

The USO is bringing Foreigner to Poland. Yes. You read that right... FOREIGNER!!!
The British-American band is taking a...