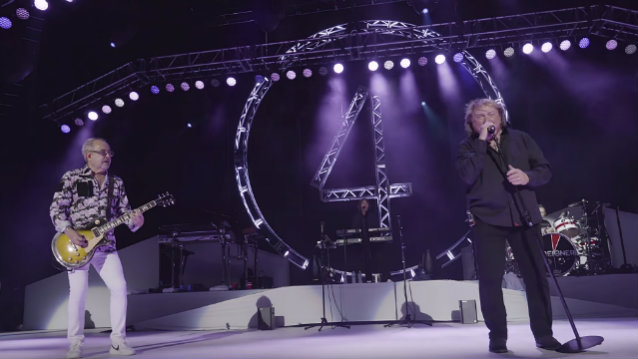 One of the highlights of FOREIGNER's fortieth-anniversary tour has been a handful of surprise appearances by original band members Lou Gramm, Dennis Elliott, Al Greenwood, Ian McDonald and Rick Wills at various stops along the trek. Inspired by these individual appearances, FOREIGNER will be joined by original members on stage for two-night special event on October 6 and October 7 at the Soaring Eagle Casino & Resort in Michigan for the ultimate toast to forty years of rock and roll. This special event will be recorded for a forthcoming 2018 TV special, DVD and accompanying album release.

Says FOREIGNER's leader and founder Mick Jones: "Playing alongside Lou, Dennis, Al, Ian and Rick again certainly brought back some special memories and we decided it would be the ultimate celebration to join together on one stage, and give the fans the best possible farewell to our fortieth anniversary."

Four of the five surviving original members of FOREIGNER reunited for a three-song encore during the band's concert on July 20 at the Nikon at Jones Beach Theatre in Wantagh, New York. Singer Lou Gramm, keyboardist Al Greenwood and multi-instrumentalist Ian McDonald joined Mick Jones to perform "Long, Long Way From Home", "I Want To Know What Love Is" and "Hot Blooded". This marked the first time Jones, Gramm, Greenwood and McDonald had all shared a stage together since 1980.

During an appearance on the "Trunk Nation" show on SiriusXM channel Volume (106),Gramm, who learned two decades ago that he had what he called an "egg-sized tumor with tentacle-like appendages" in his frontal lobe, said that his health was "very good" at the moment "considering what I went through back in 1997." He explained: "I take care of myself explicitly. I've let go of all the alcohol and the drugs and that kind of life. And the life I'm leading now is probably what I should have been doing for all those years too. But I'm doing it now. And all my numbers are good, thank God. And after something like that, you can live a good, healthy life, but you have to really be serious about maintenance."

Gramm's tumor turned out to be benign and he recovered, but it took years to retrain himself as a singer. He told "Trunk Nation" that adhering to a healthier regimen has helped him keep his voice in shape while out on the road. "Huge! Big time!" he said. "I drink a lot of water and try not to drink sugar-loaded things or things that will create phlegm, like milk and stuff. There's just certain things that you can do to help yourself. I warm up extensively before a show — my voice, that is — singing scales and little pieces of our songs and such. I get a short massage to loosen up shoulders that are tight and shoulder blades and neck muscles that I'll have to really depend on to hit the high notes. It's just a number of things that I do for myself that are good, instead of like the old days, when I was young, I'd do anything I could that was bad for me [laughs], as long as it felt good."

Gramm and Jones's June 2013 performance of "I Want To Know What Love Is" and "Juke Box Hero" at the Songwriters Hall Of Fame in New York City marked the first time the pair has performed together in a decade after Gramm left FOREIGNER for a second time. Kelly Hansen has fronted the group since 2005. Jones is the sole remaining founding member in FOREIGNER's current lineup.