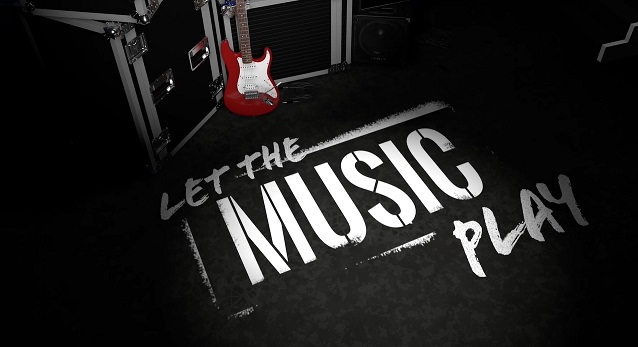 DailyBOOM Media has released "Let The Music Play", a documentary on COVID-19's brutal impact on the music industry, via YouTube (a mid-April release on Amazon Prime is also slated). This feature-length film was written by executive producer Cate Meighan, with Emmy Award-winning video-editor and co-producer Heather Dauterive, and an original score by award-winning multi-instrumentalist Jack Miele.

In early 2020, the music industry was readying itself for another blockbuster year. Acts like GUNS N' ROSES and FOO FIGHTERS were gearing up for major tours, while MÖTLEY CRÜE announced a reunion that had sold out nationwide within days. Symphonic shows, festivals, Vegas residencies, and club gigs were all booked solid when COVID-19 brought everything to a screeching halt. Overnight an entire billion-dollar industry was shut down and the fact remains that it will be one of the very last industries to fully reopen.

Not everyone fortunate enough to grace the stage makes a ton of money, especially when you consider the massive amount of overhead that goes into booking even the smallest of club tours. Artists feel as though their lives are at stake because their livelihood is their life. If they cannot work, then they cannot feed their kids and they just aren't going to make it. Right now, no one is waiting for a rock star to sign a contract or respond to an email- musicians are just as unemployed as those who would normally pay hard-earned money to see them play.

Those working behind the scenes in the industry are the hardest hit, living through a situation that snuck up on them and has then unfolded like a gradual continuation of an utter disaster. There is no money to be made, people are getting sick, and hundreds of thousands are dying. Many often do not realize just how much one venue benefits an entire community and the tourism industry. People stop for dinner before a show, they stay in a hotel, they shop, they fuel up before driving home. Everyone from parking attendants to the guy that stocks the ice behind a bar has been directly impacted by the hard-hit music business.

"Let The Music Play" is a feature-length documentary that gives viewers a detailed glimpse inside of this shattered and shuttered industry through the eyes of its' hardest workers. Famous artists, indie artists on the rise, plus rock and dance acts working the club circuit on both coasts have all lent their voices to this documentary. We also hear from the National Independent Venue Association, various promoters, venue owners, and a mastermind merch guy that put together one of the most popular streaming concerts of the year. Every voice was crucial to the telling of this story, and they also share an equal amount of importance. They speak openly about the financial hardship, deep depression of losing something that they love so much (even temporarily),and the things that they are doing to help keep their own positivity and hope alive.

The filmmakers say: "Since we are dealing with COVID-19 restrictions and there is no such thing as a backstage interview, we met our interviewees exactly as they were. Some have studios at home with great cameras and others had a more normal setup. As a media team we prefer perfection of course, but these are not normal times and we needed to be authentic. This group of people has been so incredibly honest with us and we feel a responsibility to be just as honest with our viewers in how they are portrayed."

The cast of "Let The Music Play" includes:

More information is available at www.letthemusicplay.org.

You can view "Let The Music Play" below.