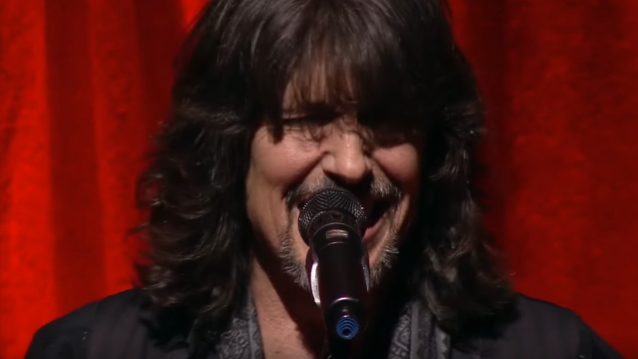 FOREIGNER's KELLY HANSEN On Touring During Pandemic: 'If I Get Sick, Or One Of Us Gets Sick, The Whole Thing Gets Shut Down'

"The fact of the matter is that we tour eight to nine months a year, so there's always a lot [of shows on the calendar]," he said. "But this is the first time that we're back in more than a year and four months. We're in our first full six-week leg, and it's been amazing.

"We had a couple of short kind of warm-up runs, and that was important, because this is a big adjustment — [going from] not doing any shows for that long and now, wow, we're doing an average of five shows a week," he explained. "And it's a big adjustment. I have to say it's something I've actually had to actually think about and work on so that the transition is okay. There's a lot of things that have to be reworked, and the muscles have to be restrengthened. And it's not a quick process."

As for how it has been trying to stay safe while performing in front of large crowds while the pandemic is still raging, Kelly said: "We're having to be very strict with our own backstage bubble and our own bubble, because no matter how you feel about COVID, the fact of the matter is that we're a touring entourage of approximately 25 people that are interfacing with different hotel staff, travel staff, airport staff, venu staff. So we interact with more people than the normal person. And if I get sick, or one of us gets sick, the whole thing gets shut down. So we're just doing as much as we can to be as safe as possible and protect ourselves. And so far — knock on wood — we're doing okay."

FOREIGNER played its first pandemic-era concert on May 19 at the Frontyard Festival in Orlando, Florida. The concert marked the band's live debut with guitarist Luis Maldonado, who joined FOREIGNER as the replacement for longtime multi-instrumentalist Thom Gimbel.