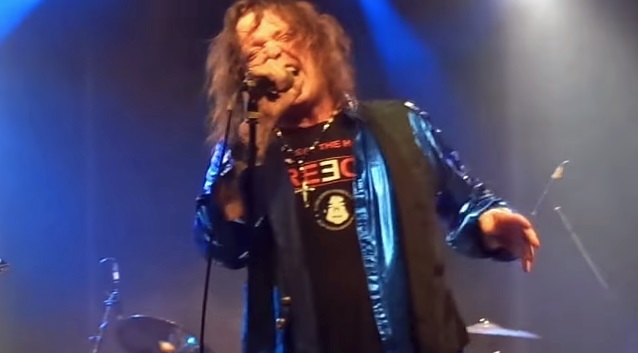 Former ACCEPT singer David Reece performed the band's "Eat The Heat" album in its entirety for the first time this past Saturday (March 10) at the Matarock festival in Barcelona, Spain. Fan-filmed video footage of the concert can be seen below.

The current SAINTED SINNERS vocalist was recruited for "Eat The Heat" in 1989 following the departure of Udo Dirkschneider. Reece's higher-pitched delivery was in sharp contrast to Dirkschneider's distinctive style, and overall, the album was a critical and commercial disappointment. Midway through the "Eat The Heat" tour, differences between the band and Reece had come to a head, leading to the altercation between the singer and bassist Peter Baltes in Chicago. By the end of 1989, ACCEPT had hung it up.

Reece, who has also played with BONFIRE and BANGALORE CHOIR, told The Metal Voice that the idea to perform all of "Eat The Heat" originated in discussions he had with Giles Lavery, the manager of former RAINBOW and MSG singer Graham Bonnet. "[Giles] contacted me — oh, God — six, seven years ago, and I sang on one of his records," Reece recalled. "And [he] would always talk to me about the impact of what 'Eat The Heat' was for him as a young guy. And then Giles and I started doing shows together, and we did England last year. I was jamming with RPG with Mario Percudani — kind of just a free, organic thing, just to stay busy in between BONFIRE shows. And he had promoted that we were gonna do ACCEPT songs from the record. And when we saw the setlist… Basically, Mario and the other guys [from RPG], they're not ACCEPT fans, so they didn't wanna play it. So I had to do 'majority rules' and say, 'Well, Giles, they just said…' And he goes, 'Dude, people are coming to hear you sing those songs.' So we had to actually… I mean, Giles got mad and stormed out of a venue one night, which I understand now, 'cause he was saying, 'Dave, this would be a good move for you.' So we ended up rehearsing 'Generation Clash' and, I think, 'Hellhammer', that day and played it live, and you know what? Of the 20 or 30 people that actually came that night, they went crazy."

According to Reece, he has "always had it in the back of [his] head" to one day perform "Eat The Heat" in its entirety. "In SAINTED SINNERS, we do 'Generation Clash', and it always goes over great," he explained. "And I'm able to still sing that stuff — thank God! — 'cause it's up there in space."

The idea finally came together when he was contacted by the organizers of Matarock festival and asked if he would be interested in playing "Eat The Heat" from front to back at this year's edition of the annual event. "And I went, 'I think that's a great idea. I'm tired of talking about it. Let's do it.' So [Tony, the Matarock co-organizer] said, 'Fantastic.' But I said, 'One time in Barcelona. Is there anything else?' And in the next 30 minutes, he booked the north of Spain, the Basque Country, Vitoria, at the Urban Rock Concept venue."

Reece said that if the Spanish dates go well, the plan is to take the "Eat The Heat Live" tour to other parts of Europe. "What I'm gonna do is I'm gonna play in all these different countries, but logistically, trying to bring a band from where I live in Italy to all these places, financially, is a nightmare. So I'm using a Spanish band — they're called SIRIUS, and they're fantastic. And they're from ACCEPT days — they grew up with ACCEPT. And they know every song, and they're especially fanatic about 'Eat The Heat'. So they are the band that's backing me. And I've seen them on film playing my songs, and [I was, like], 'Wow, these guys are like ACCEPT' — they really study it. So that's who's gonna be doing it there."

Reece said that for some of the other shows in Europe, he may be backed by guitarist Andy Susemihl who has previously played with U.D.O. and SINNER. "He and I have done a solo album [2009's 'Universal Language'] and written a bunch of songs [together]," David said. "He would be the guitarist for, say, Germany and Scandinavia, and another guy from Germany and a few other German cats to do this area… And then maybe, in the south, where I am [I would use some other guys]." He added: "It just works better [that way]. Joe Lynn [Turner] is doing it [like that], Ted Poley does it, [Johnny] Gioeli does it. It just… it works. It's the only way to make it happen."

Reece told Canadian rock journalist Mitch Lafon last year that he still looks back fondly on the "Eat The Heat" album. "You know what? It's weird, because the bad blood happened at the end of it, and I hated it — I hated everything about it," he said. "I knew it opened a bunch of doors for me, but… I, on a daily basis, get people telling me what that album means to them now. At the beginning, they hated me, but now it's, like, they have this rebirth of how great it is. And I listened to it the other day, and I went, 'That's a pretty dang good album for a first.'" 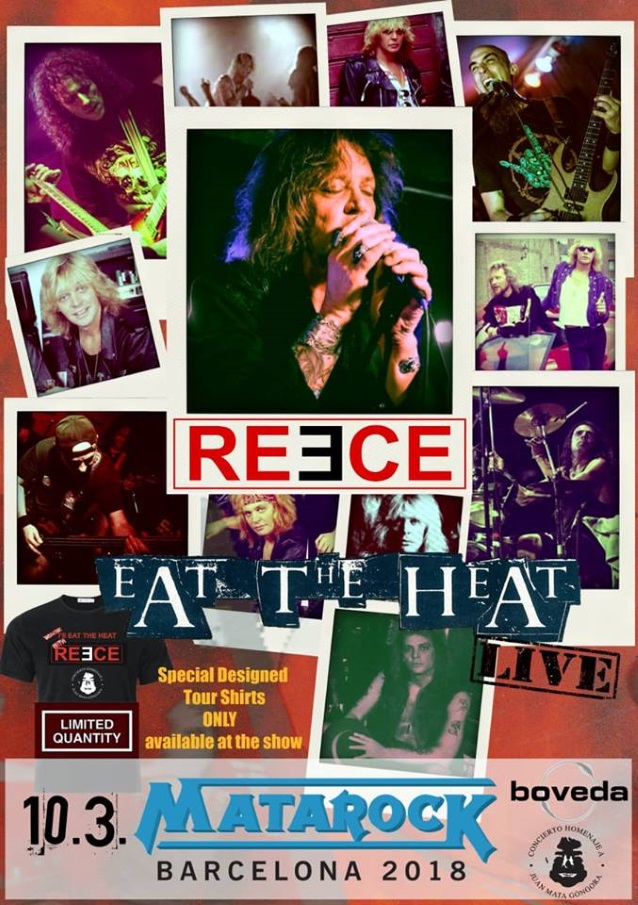