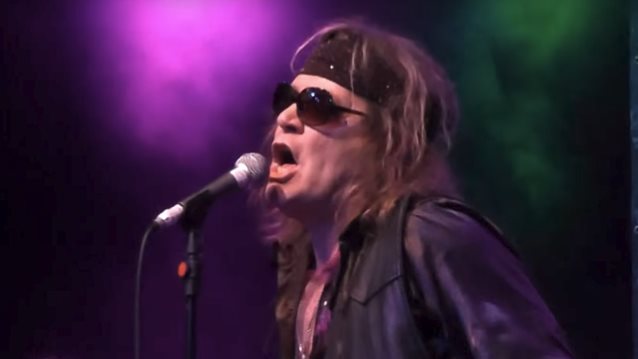 American hard rock/metal vocalist David Reece, formerly of ACCEPT and BONFIRE, spoke to Metal Forces about the progress of his third solo studio album, to be titled "Mavericks".

He said: "I originally contacted Mike Tramp [ex-WHITE LION vocalist] as we've known each other for awhile and I've done some shows with him. A friend here named Ale Lifonti put me in touch and Tramp referred me to his label Target. While chatting with Target, they expressed interest but under the condition I at least consider writing with Martin Frank [SHOTGUN REVOLUTION guitarist]. So, I e-mailed him and we talked it over and he sent me a track to write lyrics to. After demoing it the first time, he said emphatically, 'No! That's not what I'm hearing!' After I think two more attempts at it I nailed it, and all I can say is we tapped into something great!

"I describe the songs as modern heavy melodic rock! I am using less vibrato and singing straight notes on these songs, which I honestly found challenging, but that's Martin's idea because he's damn focused on what he expects from my voice."

The majority of the solo album has been completed. "It's all pretty much written, although the last few days a few new ideas have come about," David stated. "I work with Mario Percudani on vocals here in Italy at his studio called Tanzan studios; he's really got a great ear, and understanding of me as a singer. We've done numerous albums together so I fully believe in him."

A late spring 2018 release is being targeted by the former ACCEPT singer for "Mavericks". "I am currently recording the second SAINTED SINNERS album and it's slated for mid-February 2018 on El Puerto Records," David said. "I don't want release dates too close to each other for a number of reasons. One of course is press because a lot of media has an eight week lead time, so timing is absolutely everything."

A solo album contract has not been signed at the time of writing. "I've got offers now, and I am still waiting on some others to reply," David informs. "Oh yeah, and while doing all this I've been asked to be part of a sort of super group. I know how it sounds, but it's with some of rock's legends. I am writing for that as well, but not sure when it'll be released? I forgot to mention I also am guesting on Christian Tolle's next album and have recorded three tracks for it and I'm also writing lyrics for some of the other singers that will be on it. The release date will be sometime 2018.

"To be honest all of the above is in my opinion my best works so far. So, fingers crossed people agree!"

Reece was recruited for ACCEPT's "Eat The Heat" album in 1989 following the departure of Udo Dirkschneider. David's higher-pitched delivery was in sharp contrast to Dirkschneider's distinctive style, and overall, the album was a critical and commercial disappointment,

Midway through the "Eat The Heat" tour, differences between the band and Reece had come to a head, leading to the altercation between the singer and bassist Peter Baltes in Chicago. By the end of 1989, ACCEPT had hung it up.