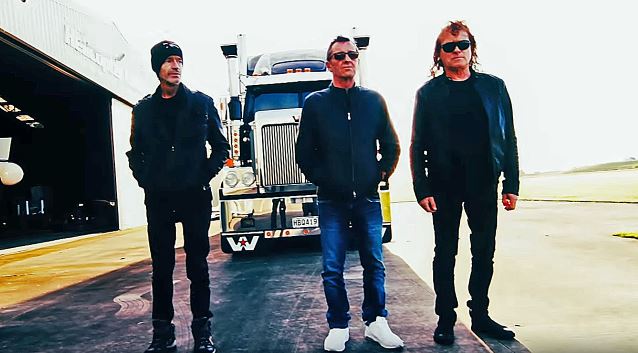 A teaser for "Head Job", the video for the title track of former AC/DC drummer Phil Rudd's solo album, is available below. The full clip, which was filmed in Tauranga, New Zealand, will make its online debut this weekend.

"Head Job" is being re-released by London-based agents Simon Britton and Alan "Big Al" Bellman, of record company Wave 365 Media, whom Rudd signed a deal with in August.

Rudd revealed a couple of months ago that he underwent an emergency procedure after suffering a heart attack, but that he's already recuperated and ready to return to his kit. '

Rudd, who was booted out of AC/DC following his arrest in 2014 on numerous charges, will tour Europe in the fall and also give a masterclass at Paul McCartney's Liverpool Institute of Performing Arts in Liverpool. Asked if he would like to rejoin AC/DC, he said: "If Angus [Young, guitar] wanted me to play, then that is up to him, but I don't really want to play with Axl Rose. I don't really rate him."

It was the original release of "Head Job" in 2014 that sparked Rudd's initial meltdown, with the drummer allegedly so angry at a personal assistant over the way the release was promoted that he threatened to have the man and his daughter killed.

Police investigating that claim against Rudd also found him in possession of drugs when they raided his home in November 2014.

Although Rudd played on AC/DC's latest album, "Rock Or Bust", the band recruited Chris Slade to replace Rudd for touring purposes. Slade, who had previously played in the band from 1990 to 1993, remains part of the lineup.

Rudd played in several Melbourne bands such as BUSTER BROWN and THE COLOURED BALLS before joining up with AC/DC in 1975 and making his debut on their second album, "T.N.T."

He played on 12 of the band's 16 studio albums, including massive sellers like "Highway To Hell" and "Back In Black".

"Head Job" was recorded with Kiwi musicians Allan Badger of Rotorua and Geoffrey Martin of Auckland.