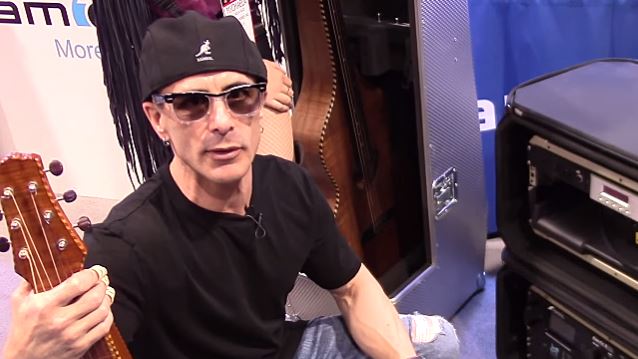 Former ANTHRAX guitarist Dan Spitz has taken issue with a 2004 Guitar.com article which suggested that the band's drummer, Charlie Benante, was responsible for laying down lead guitar on many of the group's classic songs.

In the story, which is based on an interview with Benante and ANTHRAX guitarist Scott Ian gave to the web site to promote their 2004 live album "Music Of Mass Destruction", Benante and Ian are referred to as "the group's primary songwriters" while Benante is also described as "an extremely competent guitarist who actually writes many of the group's heaviest riffs and plays lead guitar on all of the albums."

On October 21, Spitz took to his personal Facebook page to challenge the insinuation that Benante recorded any of the guitar solos on the ANTHRAX albums that Spitz is featured on. Dan wrote: "Really, Charlie??? You played all the leads on every single ANTHRAX album? I challenge you to play one of any of my leads (that's all of the leads on every song on every ANTHRAX album I created to choose from) from 'Fistful Of Metal' through 'Sound Of White Noise'. I also have every tape of me creating every one of those leads from my own house!"

Spitz explained in the comments section below his original posting that he was simply trying to set the record straight. He wrote: "Once upon a time long ago while I was in Switzerland, someone decided to lay claim in endless articles to things they didn't do and never mention the creator. After years of this, I guess people start to expand and believe their own lies.

"[I am] just setting the history books of thrash metal straight. I want nothing more. A challenge has also been initiated."

Dan then doubled down on his Benante bashing, accusing the drummer of intentionally misleading the interviewer. He wrote: "'Let's wipe Spitz's name away and 'claim' this and that'... NOT!

Also chiming in on the discussion was early ANTHRAX producer Carl Canedy, who backed Spitz's claim that the guitarist was responsible for recording all of his own leads. Carl said: "Dan, we worked on three projects. You played every solo except one whammy bar riff Scott played. Every solo on each of those albums. 'Fistful', 'Armed And Dangerous' and 'Spreading'. I'm not sure what's up or what's being said but I was there hitting record every solo. It's sad things are so unpleasant."

Canedy's comments were followed by a "thank you" message from Spitz, who expressed his gratitude to the producer "for clearing up some truth." He added: "It really does mean a lot to the ANTHRAX family coming from you, the producer of 'Fistful Of Metal', 'Armed And Dangerous' and 'Spreading The Disease'. So now we all have the producer who pushed the buttons on the tape machine on every solo ever recorded on three ANTHRAX albums confirming I played and recorded every single note! Undisputed thrash history shall now stay as it should."

In 2009, Spitz underwent open-heart surgery to repair a main artery in his heart that was said to be "almost completely closed."

Spitz is a born-again Christian and Messianic Jew who has frequently cited his faith as an influential component to his life.

Spitz took part in the reunion of ANTHRAX's classic lineup in 2005 and 2006 but left the band after ANTHRAX's split with singer Joey Belladonna.