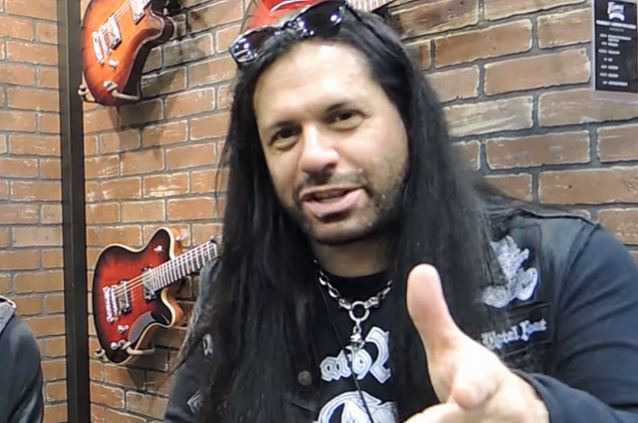 Former ANTHRAX singer Neil Turbin reviewed the band's latest album, "For All Kings", for Canada's The Metal Voice. You can now watch the clip below.

Speaking about the CD, Turbin said: "'You Gotta Believe', the first song on the album, it sounds kind of like a soundtrack for a movie. And you don't know what movie it is; it's just long intro. The song 'For All Kings' [is] probably not one of my favorite songs on the album, just because of the melody of the vocals. I'm just not… I don't know… It just doesn't… It doesn't do it for me personally. I would say that 'Breathing Lightning' is probably the best song on the album. That one, the vocals are less quirky than in other tracks; it really tends to sit more in the track. The riff reminds me of, probably, their 'Among The Living' or 'Spreading The Disease' timeframe-type riffs. I would say 'Zero Tolerance' I thought was an interesting song. It very much reminds me of an old JUDAS PRIEST riff where the vocal follows the guitar, like 'The Ripper'. The song 'Blood Eagle Wings', I think that one's a little bit more interesting. On the 'Monster [At The End]' song, they keep saying something about underwear. Listen to the lyrics: 'Underwear… underwear.' I don't know why people sing about their underwear. That does not excite me. Certainly it sounds tight. The band sounds professional. Obviously, the singer can sing. That's not what we're talking about. It's more so just the sound is quirky on the vocal, just the feel of how the vocal melody attaches to the guitar riff and so forth, or just the feel of the song. But, you know, that is part of what the current ANTHRAX sound is. But, overall, I think the album will probably do well for them, and all the best to 'em."

Turbin in 2014 slammed Scott Ian over the ANTHRAX guitarist's portrayal of the vocalist in "I'm The Man: The Story Of That Guy From Anthrax", saying: "I find it very sad that somebody I've had no contact for 30 years feels that it's necessary to fabricate lies about me in order to draw attention to themselves." He added: "I wish them all the luck in the world on their new work of fiction. I'm sure it must be as good as 'The Lord Of The Rings'."

In a published excerpt from the book, which was released in October 2014 via Da Capo Press, a member of the Perseus Books Group, Ian detailed his tensions with Turbin — vocalist on ANTHRAX's 1984 debut album, "Fistful Of Metal" — and the band's split with original bassist Danny Lilker, a period of time that Scott describes as "the worst moment for me in the history of ANTHRAX."

"As soon as we started touring to support 'Fistful Of Metal', Neil got ultra-cocky," Scott wrote. "He felt like he was the boss man, and he became inflexible. His attitude was, 'I'm the singer and it's my way or the highway.' He thought we'd be dead without him. The shitty thing is, he was right. We were on the fast track. Jonny Z [founder of '80s metal label Megaforce Records] was managing us, and he was bringing RAVEN back in the summer of 1984 to tour like they did the year before with METALLICA opening, and this time we were scheduled to open all the dates, starting May 30. Everything was already announced and planned, and if we lost our singer, we'd have had to cancel. Jonny wasn't going to wait around for us. There were other bands he was talking to like OVERKILL and LEGACY (which became TESTAMENT). We had to strike while the iron was hot, and that gave Neil the ability to pull all these power plays.

"The biggest dick move Neil ever pulled was when he fired Danny Lilker behind our backs after 'Fistful' came out in January 1984. The main reason he did it, in my opinion, was because Danny is taller than him. He honestly didn't think someone should be taller than the front man onstage. He thought it made him look bad, so he tried to stand as far away from Danny as possible, which was hard when we were playing stages the size of ping pong tables."

In a 2009 interview with VoltageMedia.com.au, Turbin stated about his departure from ANTHRAX: "I was a member of ANTHRAX from August 1982 up until August 1984. I was a member of ANTHRAX for exactly two years. The reason I left… well, there were a number of things, actually. The whole relationship started to deteriorate after a while, there was definitely backstabbing from certain people who chose to hang around with other people instead of focusing in the band. I was into metal… focused on music while Scott Ian and Charlie Benante [drums] formed an alliance and Dan Spitz [guitar] just followed. In a matter of months, it was simply a case of them versus me. It was very difficult to deal with them, because it was obvious that we wouldn't get along and they were also more interested in other things than music… at least back then. We didn't establish a trusted friendship within the band… that's for sure!"