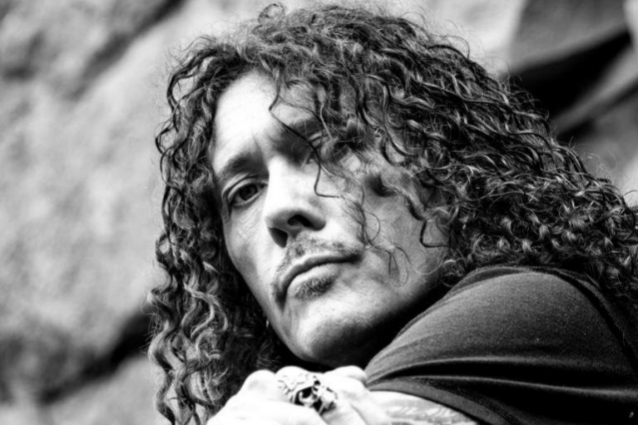 The official lyric video for the song "Out Of The Hollow" from SKYBLOOD, the solo project of acclaimed Swedish hard rock singer Mats Levén, can be seen below.

Levén says about the track: "It's about someone realizing it's time to move on. Even if it means having to face the dark unknown."

His name belongs to the most influential and illustrious ones in Swedish metal. Levén's distinctive and colorful voice has graced albums by CANDLEMASS, THERION, KRUX, YNGWIE MALMSTEEN and AT VANCE. Now, after lending his voice to others for decades, fans can finally witness the charismatic singer's solo album. Under the new flag of SKYBLOOD, it will see the light of day on November 22 via Napalm Records.

Dark and hypnotic anthems meet exotic trips into emotional soundspheres on tracks such as "The Voice", which triumphs in musical finesse and timeless elegance.

This debut is an unchained and exciting affair feeding off of epic and classic metal influences, doom and melodic hard rock — an unpredictable mixture soaring to glorious height.

Mats has been working on his solo project for several years. Most instruments were recorded by Mats himself at his own studio, the Uzi G Studio in Stockholm. According to Mats, SKYBLOOD is "who I am. This is SKYBLOOD. SKYBLOOD equals pride, empathy and rage. 'The Voice' carries that flag. A fight for the cause of truth."

"Skyblood" will be coming on vinyl, CD and in digital formats.

Between 2016 and 2018, Mats toured with rock theater sensation TRANS-SIBERIAN ORCHESTRA, whose 20th-anniversary trek visited 65 cities across North America, for 100-plus performances, before concluding on December 30.