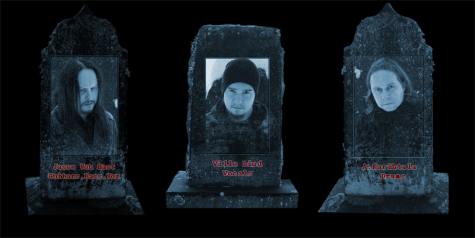 With regards to how TOMB OF FINLAND came together, Jasse said, "TOMB OF FINLAND got the first shovel full of soil into its mouth in the fall of 2009. That was a natural process because a difficult season of tortured and painful life was digging a grave for itself without hands.

"Thousands of nights filled by misery and tons of tormented thoughts were gathered together. First nails to the coffin had been hammered. Worms in TOMB OF FINLAND's corpse crawled to freedom and were fed by my rotten brains in January 2010. That was the day of birth for the first TOMB OF FINLAND's song called 'Life & Slavery'. That song was written at once when torturing my guitar for the first time in six months.

"First demo recordings were made instantly with my dusty guitar. It was the day when the curtain of darkness fell down.

"By the unholy thoughts of northern pagan mind, it felt so true and fresh after many years of straightforward rock 'n' roll and productional perfectionism. The pieces of wild thoughts were gathered as one in my confused mind. That was the point of return.

"The coffin was now ready and open wide for depressed and anquished souls.

"A lot of new material were written in a few days. My mind was open for new season of darkness.

"If necessary, you could describe TOMB OF FINLAND's music as a some kind of a combination of early 1990s doom/black/death metal with modern twist.

"In the beginning TOMB OF FINLAND was only a one-man project but thought of a real working band was burning my mind.

"Later I contacted my previous band member A. Karihtala (CHARON) and the coffin got more flesh inside.

"He decided to help me with my new project. Drums were recorded in Soundtrack studios/Magnusborg, Porvoo on February 2011.

"At first I thought I'd make all the vocals by myself with black metal shrieks but then I came up with an idea that music would sound more destructive with lower growls. So Antti suggested to ask Ville to join our woe. Vocals were recorded on November 2011 in Oulu. The coffin was now full and ready to rot."