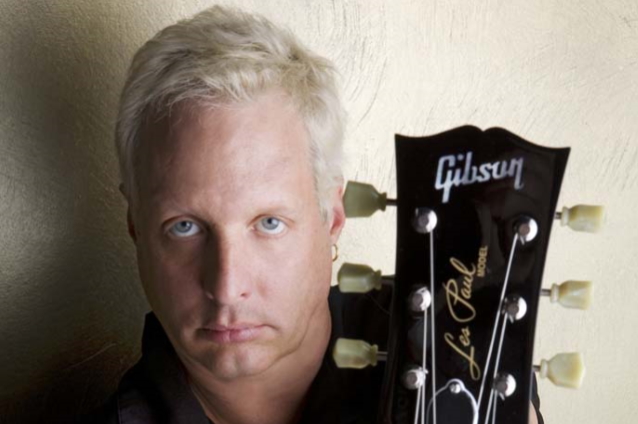 Former David Lee Roth guitarist Bart Walsh has died at the age of 56. According to Bart's family, the cause of his death was gastrointestinal bleed and dehydration.

Walsh was the original guitarist for the VAN HALEN tribute band THE ATOMIC PUNKS, which also once featured singer Ralph Saenz, now better known as Michael Starr from STEEL PANTHER. His years spent performing with them caught the eye of VH frontman David Lee Roth, and he was soon recruited to join Dave on his 1999 world tour as his lead guitarist.

Although Bart is best known for his time playing hard rock, he grew up under the tutelage of his great uncle Cecil Campbell, a Country Music Hall Of Famer.

Schooled at the Musicians Institute in Los Angeles, alongside notables like Jennifer Batten (Michael Jackson) and Paul Gilbert (RACER X and MR. BIG),Walsh put together the band LANCIA. They quickly became a top L.A. draw, and their self-titled CD was released in Japan to great acclaim.

After his time with THE ATOMIC PUNKS and David Lee Roth, Bart worked with POISON frontman Bret Michaels for a while on one of his solo projects, and then went to work for Gibson Guitars. For several years, Bart traveled all over for Gibson doing hundreds of clinics demonstrating their products, and educating buyers on all the things that make Gibson the company of legend that they are.

More recently, Walsh was working on multiple projects, including one with his wife Delaney, on her first full-length CD release, where Bart played all the guitars on the CD, as well as produced the entire disc. Bart was also involved with an all-star project called the ROCK DAWGS, which featured some of his closest friends and musicians, including JUDAS PRIEST drummer Scott Travis.

Sad news from the DLR world: Former DLR guitarist Bart Walsh passed away on Saturday, Nov. 2nd. Cause of death is unknown at this time. RIP Bart.... https://t.co/Yq3y948vBJ

R.I.P. Bart Walsh ....A great guy, talented guitar player, and always beyond helpful when I worked at Gibson Guitars...I hope you’re happy playing guitar up there buddy!!!! You’ll be missed...

My dear friend Bart Walsh unexpectedly passed away yesterday... He was a great talent, super intelligent and always a...