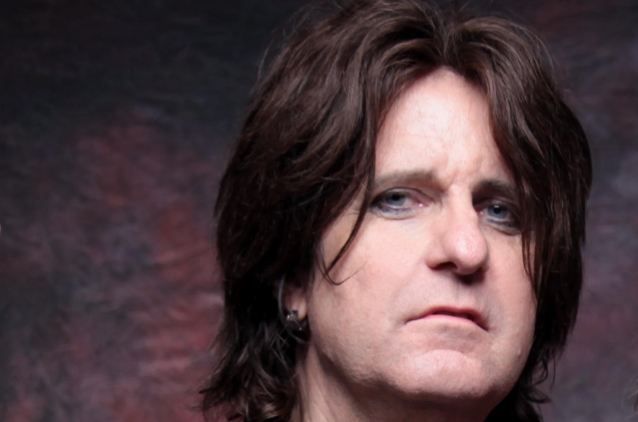 Former EUROPE guitarist Kee Marcello says that he doesn't care for any of the band's post-reunion albums, insisting that the songs don't have "any melodies anymore."

Marcello was EUROPE's lead guitarist during the Swedish band's most successful period after replacing founding member John Norum in 1986. He remained with the group until they broke up in 1992 and also took part in the band's one-off reunion gig in Stockholm on New Year's Eve 1999, which was the first and only time EUROPE has performed with both Norum and Marcello. When EUROPE reformed with its classic lineup in 2003, Marcello was not included.

"I've always been the one thinking a bit more commercial than, for instance, the singer in the band," Marcello told The Metal Gods Meltdown in a new interview (hear audio below). "I wanted our reunion to be like a celebration [of] what EUROPE was all about — all the big hits and all that. Because I still thought, in 2000, that the music scene is too different. And EUROPE can't really do a grunge album; that's gonna be fucking ridiculous. We can just not do that. So if we wanna come back and do something, we should do something like we used to do. And they weren't on the same wavelength, so that's why that never happened, and I went solo."

Asked if he would consider going on tour with EUROPE if singer Joey Tempest called him up tomorrow and invited him to rejoin the band, Marcello said: "If it includes playing the new stuff, no fucking way! I simply don't like it. I don't wanna be an asshole, but I don't hear any melodies anymore. If he called me up and said, 'Hey, Kee. It's Joey. I really want you to go on tour with the band, and we're gonna play all the good stuff from the old days.' Fuck yeah! I'm in."

Kee also looked back on EUROPE's original split, which he says happened because of the rise of the early '90s grunge movement. "[We didn't go on hiatus] because of the record company — they wanted a new album after [1991's] 'Prisoners In Paradise' — because we were still selling millions [of records], mind you," he said. "But the thing is, we were thinking, 'What kind of album should we do in these times?' 'How do we promote another 'I'll Cry For You' in times of 'Smells Like Teen Spirit'?' We didn't recognize the music scene, so we just chose to, 'Let's fuck this for a while. Let's do something else and see what happens.' And the next time we met was actually in 2000 when we did that New Year's Eve gig — minus 10 degrees, on a raft, in front of the royal castle and a quarter million people. It was amazing. That was the reunion gig with both guitar players. And after that, we started talking about doing a reunion thing where I was included."

In a 2014 interview with The Rocktologist, Marcello described his relationship with Tempest as "non-existent," but added that he remembers his EUROPE days fondly. He said: "I have many very good memories from that era. It was both very inspiring and cataclysmic at the same time considering the unbelievable following we experienced during that time."

The last few years have been both varied and intense for Marcello with projects such as the release of a top-selling autobiography "The Rock Star God Forgot", a DVD ("Live From The Third Rock"),a hugely successful lead role in a top selling Swedish version of Broadway musical "Rock Of Ages", and induction into the Swedish Music Hall Of Fame.

The latest album from Marcello, "Scaling Up", is available now on the Frontiers Music Srl label and is Kee's fifth solo LP. There are also imminent plans for the release of a new live album.