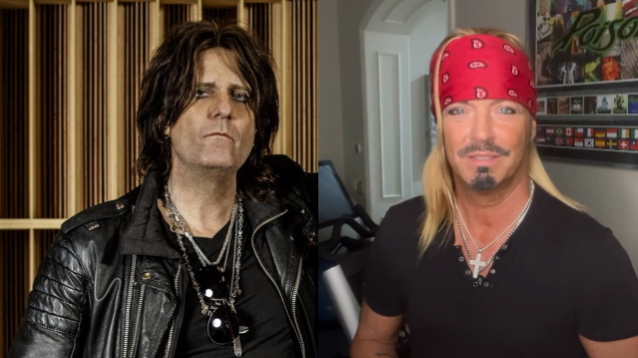 During an appearance on the "White Line Fever" podcast, former EUROPE guitarist Kee Marcello spoke about how his 1980s Swedish glam-rock band EASY ACTION was forced to take legal action against POISON for allegedly "stealing" the chorus to the EASY ACTION song "We Go Rocking" for the POISON U.S. smash-hit "I Want Action". EASY ACTION was said to have been awarded a financial settlement in the case.

Kee said (as transcribed by BLABBERMOUTH.NET): "I got [in] contact with the producer of POISON's album ['Look What The Cat Dragged In'], Ric Browde, and he told me he brought the EASY ACTION album and the HANOI ROCKS album to the studio when he did the POISON album, and he put on 'We Go Rocking' and suggested the band make a cover out of it. And they said, 'It's a fucking Swedish glam band. Who's gonna know?' And they just ripped us off. And this is Ric Browde personally saying this. So it's so fucking obvious that it happened.

"If it would have been me doing such a mistake, I would say, 'I'm so sorry. I fucked up. Man, I took your song. I'm so sorry. I'm gonna make it up to you.' [But] to this day, believe it or not, they completely bluntly deny it," he continued. "When POISON played at Sweden Rock Festival, they had a press conference, and somebody asked — a lot of people asked — 'What about Kee Marcello? What about EASY ACTION? What about 'We Go Rocking'?' And they said, '[We] never heard of any of those.' And that was the end of it. Then people tried to go on, but they just bluntly denied it. And it's so ridiculous. At least agree you're wrong sometimes.

Regarding how EASY ACTION ended up receiving a financial settlement in the case, Kee said: "The publisher [for 'We Go Rocking'] is Warner Chappell Music. I'm [listed as the] hundred percent [writer] of the music, and there's three of us [who are credited for] the lyrics — the singer, the bass player and me — in 'We Go Rocking'.

"The thing is I was so busy when this happened, I didn't sue [POISON]; it was Warner Chappell Music that sued them and threatened to take them to court," Marcello explained. "It was really a dumb deal. I wonder why they didn't do that. Instead they made a settlement out of court. But as you know, when you do a settlement, they don't have to [publicly admit] that they [did anything wrong]. If we would have taken them to court, I would have been a co-writer on their song, which I think would have been fair. That's how you admit you've been doing something wrong. Because [if I had been listed as a co-writer on 'I Want Action'], every time they do a best-of POISON album and the song is on there, some money goes to me. It doesn't now. We just got this sum of money, a settlement out of court. If I would have been more plugged into the whole thing… If there's one regret I have, it's not dragging their sorry asses to court."

EASY ACTION was formed in the early 1980s and was a pioneering band on the Swedish and Scandinavian glam rock scene. When singer Tommy Nilsson joined the group in 1986, they moved towards a more adult radio friendly sound. The album "That Makes One" attracted global attention but its momentum came to a quick halt when Marcello left the band to gain worldwide success as the new guitar player in the band EUROPE. Nilsson went on to become one of Sweden's biggest pop stars, scoring several huge domestic single hits. Following a number of successful years with EUROPE, Kee released solo albums and a biography as well as performed in the musical "Rock Of Ages", among other projects.

An earlier incarnation of EASY ACTION, featuring Zinny Zan on vocals, had reunited in the past, but in 2019, the "That Makes One" lineup of the band makes its first comeback since 1986 exclusively at the Sweden Rock Festival. The show marked Nilsson's first return to the world of hard rock in 33 years. The lineup also included guitarist Chris Lind, bassist Nalle Påhlsson (TREAT, THERION) and former EASY ACTION live keyboard player Jörgen Ingeström.

Earlier this year, EASY ACTION released a video for a new song "Dazed", which was written about the wave of populistic propaganda that has reshaped the world in recent years.