Former EVANESCENCE guitarist/songwriter Ben Moody will release a solo album on March 3, 2009. The CD will feature a guest appearance by young Montana alternative rock/acoustic solo artist Hana Pestle, who is signed to Moody's label, FNR Records. Pestle's sound carries a unique blend of influences as diverse as RADIOHEAD, SARAH MCLACHLAN, and THE CRANBERRIES. Hana Pestle is now touring the Midwest, performing her songs "These Two Hands", "Just a Phase" and her own haunting rendition of "Hallelujah". She will appear tonight (Tuesday, December 16) at Juanita's in Little Rock, Arkansas where she will be joined by Moody.

Since his departure from EVANESCENCE in 2003, Moody has collaborated with some of the hottest stars in the music business; the established and the up-and-comers. His songwriting and producing credits include working with AVRIL LAVIGNE on her second release "Under My Skin", penning "Nobody’s Home", "This Time" with CELINE DION, "What About Now" from CHIS DAUGHTRY, and Moody co-wrote and produced the smash hit "Because of You" with David Hodges for KELLY CLARKSON.

The reason for Moody's new direction, FNR Records, is simple. He explains: "After going to such great lengths to protect the integrity of a project during the creative process, it seemed almost sinful to let the major label monster destroy it." 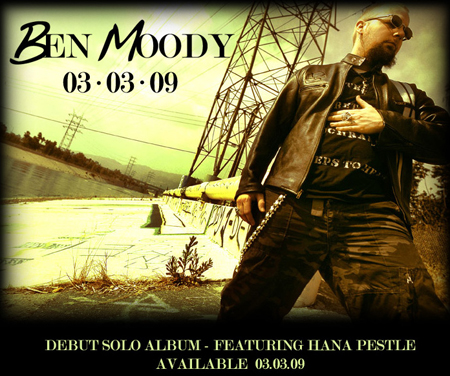