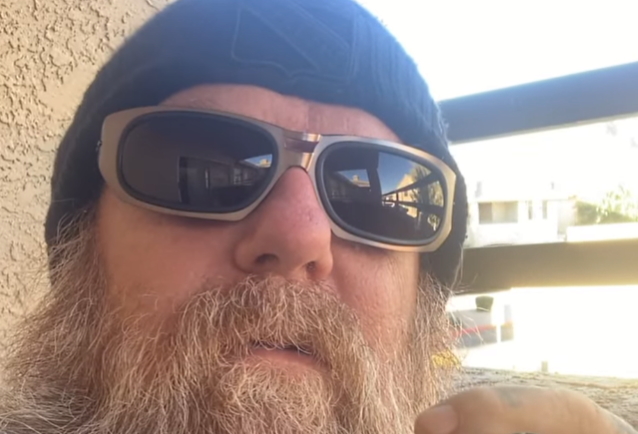 "Persona Non Grata" is the follow-up to 2014's "Blood In Blood Out", which was the San Francisco Bay Area thrashers' first release since the departure of Dukes and the return of Steve "Zetro" Souza, who previously fronted EXODUS from 1986 to 1993 and from 2002 to 2004.

Asked in a new interview with Pierre Gutiérrez of Rock Talks if he has had a chance to listen to "Persona Non Grata", Dukes said: "I did. I listened to it a couple of times. I really like 'Lunatic-Liar-Lord'; that's my favorite track on the record. It's all good though, man. I know the record's good. That one song just hit me — it struck out to me as that's my favorite on the record."

In some of the first interviews after his split from EXODUS, Dukes slammed his former bandmates, claiming that he "didn't like the new music they were writing" and saying that "there was just no passion in it." "It was just regurgitated shit that we had just done and done over and over again," he said during a 2015 appearance on the "Opie And Jim Norton" talk show. "There was no life to it, so I just kind of started to separate myself."

Prior to his exit from EXODUS, Dukes laid down the lead vocals on the music that eventually became "Blood In Blood Out". The album — with Souza's vocal tracks — was released in October 2014 to great critical acclaim. Some of the Dukes recordings were eventually leaked on YouTube and can be heard below.

EXODUS guitarist Gary Holt in 2014 defended the way the band fired Dukes, saying that "much time" was spent mulling the decision before the final move was made. He also shot down Internet speculation that the split with Dukes was motivated by financial reasons or that it was masterminded by TESTAMENT singer Chuck Billy, who co-founded EXODUS's one-time management company Breaking Bands LLC. "It isn't for the money [and] Chuck did not orchestrate this," Holt said. "There were issues behind the scenes and we came to a conclusion."

Three years after he was dismissed from EXODUS, Dukes performed with the band during a July 2017 concert in San Francisco, California. He sang several songs with the group on the second of EXODUS's two-night stint at The Chapel in what marked the band's first headlining Bay Area club shows since late 2013.