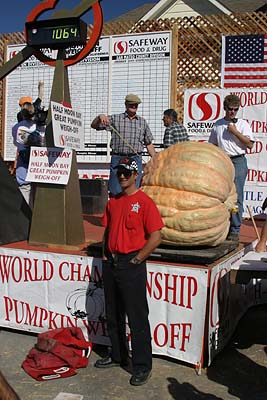 Former FAITH NO MORE guitarist Jim Martin, who has reinvented himself as a pumpkin grower, won for the heaviest pumpkin grown in California at the 30th Annual Safeway World Championship Pumpkin Weigh-Off, which was held on October 13 in Half Moon Bay, California. Martin took fourth place overall with his 1,064-pound pumpkin (photo),which was more than 150 pounds lighter than the championship-winning 1,180-pound monster from Steve Daletas of Pleasant Hill, Oregon (photo). Martin broke his own personal record of 877 pounds (photo),which he had achieved at the 2002 Weigh-Off — enough to land him in the seventh place at that year's championship.