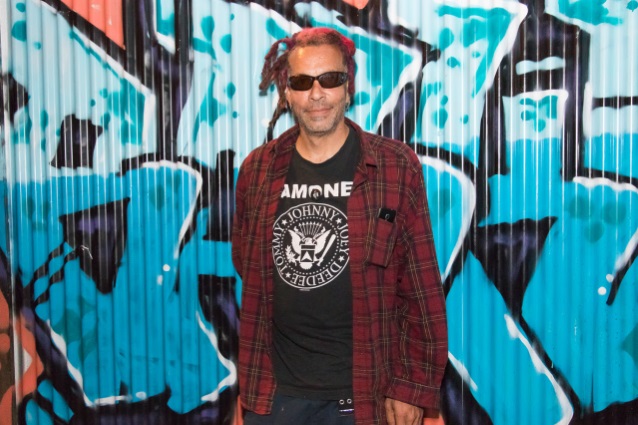 Former FAITH NO MORE singer Chuck Mosley has died at the age of 57.

His family has issued the following statement: "After a long period of sobriety, Charles Henry Mosley III lost his life on November 9th, 2017 due to the disease of addiction.

"We're sharing the manner in which he passed in the hopes that it might serve as a warning or wake-up call or beacon to anyone else struggling to fight for sobriety.

"He is survived by long-term partner Pip Logan, two daughters, Erica and Sophie, and his grandson Wolfgang Logan Mosley.

"The family will be accepting donations for funeral expenses. Details to follow when arranged."

FAITH NO MORE added in a statement: "It's with a heavy, heavy heart we acknowledge the passing of our friend and bandmate Chuck Mosley. He was a reckless and caterwauling force of energy who delivered with conviction and helped set us on a track of uniqueness and originality that would not have developed the way it had had he not been a part. How fortunate we are to have been able to perform with him last year in a reunion style when we re-released our very first record. His enthusiasm, his sense of humor, his style and his bravado will be missed by so many. We were a family, an odd and dysfunctional family, and we'll be forever grateful for the time we shared with Chuck."

In a November 2016 interview with The Quietus, Mosley denied that his substance abuse was the reason he was fired from FAITH NO MORE in 1988.

"Off the road, I would go out and get fucked up and do stuff, but when I was on the road, I would have a couple of beers a night," he said. "There were a couple of times where I got too drunk, but, you know, that was just punk rock, and that was who I was and stuff. But 97 percent of the time, absolutely not. You know there was a time, I probably shouldn't be saying this, but somebody passed me mushrooms while we were playing. I never felt them until hours later when we were done. That happened one time in Mississippi. But other than that, no, it wasn't true. And if it was true, it was when I wasn't with them. That was my own downtime, and that's kind of my weakness."

In the same interview, Mosley admitted that he "never stopped drinking, I just don't drink that much anymore. You know, sometimes on the weekends; it's not like a daily thing," he said. "I did tend to self-medicate like that, but I just don't have it in me anymore. I'm old. Drinking all the time, carrying on like that, having to deal with the pain. [Laughs] But on tour, it makes me relax. I don't get drunk before I play, but I might get drunk after. I'll have a couple of shots before, you know. I can totally live without it, but here in this scenario [while on the road], it's hard. Maybe if I had some hypnosis or something, I don't know, but I've always been freaked out in my mind performing."

With Mosley at the helm, FAITH NO MORE became one of the '80s' leading underground bands on the strength of 1985's "We Care a Lot" and 1987's "Introduce Yourself". Despite exiting the group in 1988 under acrimonious circumstances, the Ohio-based Mosley was friendly with most of his former FNM bandmates and even joined them on stage in recent years.

After "We Care a Lot" was reissued in 2016, most of the album's recording lineup celebrated the re-release by performing two shows in California, billed as "Chuck Mosley And Friends".

Mosley's debut solo album, "Will Rap Over Hard Rock for Food", was released in 2009, but failed to achieve much commercial success, despite contributions from such popular artists as KORN frontman Jonathan Davis, ROB ZOMBIE guitarist John 5 and FAITH NO MORE keyboardist Roddy Bottum.

Today the EMP/THC family has suffered a devastating loss, with the passing of our friend, and artist, Chuck Mosley. Here...