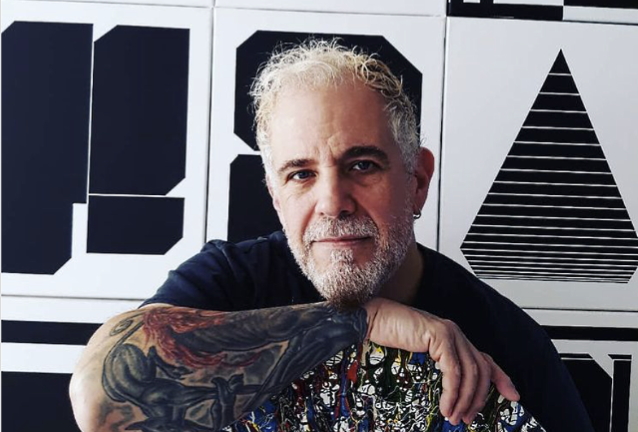 Former FOZZY drummer Frank Fontsere has opened up about his departure from the band, saying he no longer wanted to spend time away from home.

Fontsere's exit from FOZZY was officially announced this past Monday (January 3). The band also named his replacement, former THROUGH FIRE drummer Grant Brooks.

Earlier today, Frank took to his Instagram to write: "Hello, As you may have already heard, I have decided to step down as the drummer for FOZZY. This was a very painful decision to make even though it was the correct one. Getting on stage with guys I love and making music I love is something I will miss terribly. I will also miss getting to meet and interact with all the wonderful people who came to see us over the years. FOZZY has the best fans in the world.

"I want to take this opportunity to thank everyone who reached out with positivity and support over the last few days," he continued. "Your messages of encouragement mean more to me than you can imagine. I also would like to wish the guys in FOZZY and GUARDIANS OF THE JUKEBOX all the success they deserve. I admit it will be hard to watch from the sidelines, but it's the way it needs to be.

"As was mentioned in the post on Monday, the reason I need to step away is I no longer want to spend time away from home. If I'm honest, traveling was always my least favorite aspect of being in a band. Having a wife and son, especially a son who just turned 7 and is growing and changing day by day; touring was getting increasingly hard. It was affecting my mood and I was having a negative impact on the people around me. In a band situation, this is not good. It was also affecting my love of drumming. Drumming was starting to feel more like a job than a passion. In a band situation, this is lethal. I need a change.

"This is not the last you will hear from me however," Frank added. "You're not getting rid of me that easily. I have lots of plans for the future which include creating art and making drumming videos. In a lot of ways, I feel as though my life is just beginning.

"I sincerly hope you will continue forward on this journey with me. Much love to all and you'll be hearing from me again soon. Frank."

Fontsere was a founding member of FOZZY, having formed the group in 1999 with singer Chris Jericho and guitarist Rich Ward.

In a separate statement on his personal Facebook page, Brooks said that he was "super excited" about his new gig. He wrote: "So thankful for this amazing opportunity! Huge shoutout to Rich Ward, aka The Duke and Chris Jericho for reaching out to me and offering me the gig.

"My first shows will be on the Jericho Cruise setting sail from Miami, Florida to Nassau, Bahamas on March 14-18!"

FOZZY will release its new album, "Boombox", on April 15. The LP, which includes the top 10 singles "Nowhere To Run" and "Sane", was once again produced by Johnny Andrews.

FOZZY's "Save The World" 2022 U.S. tour, featuring special guests GFM, KRASHKARMA and THE NOCTURNAL AFFAIR, starts on March 31 in Detroit, Michigan and wraps on May 16 in Sauget, Illinois. Additionally, to celebrate the arrival of "Boombox", FOZZY will play an album-release party on April 11 at Irving Plaza in New York City, where fans will be able to purchase and listen to the full album exclusively in advance of the release.

FOZZY debuted a brand new song, "Purifier", during its September 2021 concert in Flint, Michigan and has been performing it live ever since. Back in July, FOZZY played another new song, "The Vulture Club", during its concert in Iowa City, Iowa. The band also performed its latest single, "Sane", live for the first time.