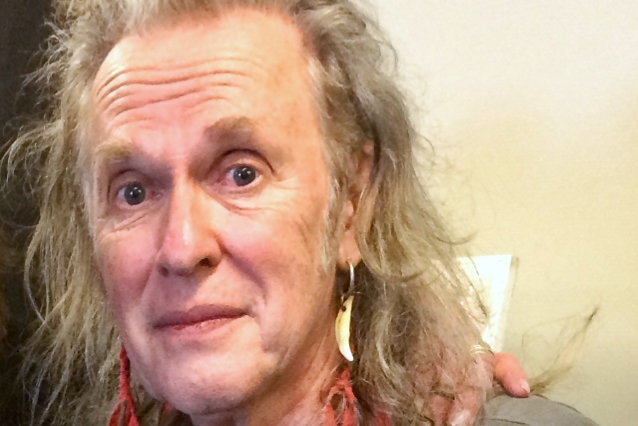 Bernie Tormé passed away on Sunday, March 17 at the age of 66.

The guitarist's death was confirmed by Bernie's family, who issued the following statement: "Bernie Tormé passed away peacefully on the 17th March 2019, one day short of his 67th birthday, surrounded by his family. He had been on life support for the past four weeks at a London hospital following post-flu complications. Bernie will be remembered for dedicating his life to his music for five decades. He will be sorely missed."

It was reported at the time that that the Irish musician was "extremely ill" and that he had been placed on a ventilator.

TWISTED SISTER frontman Dee Snider wrote on Twitter earlier today: "Woke up to find out my friend @Bernie_Torme has died. He was a guitar god who played with @OzzyOsbourne & Ian Gillan. We worked together for 3 years, writing over 100 songs for the ill-fated DESPERADO. I loved that man & today my heart is broken. RIP Bernie. Your guitar weeps."

Tormé is known for stepping in and saving the day for Ozzy when Randy Rhoads tragically died. Ozzy and Bernie hadn't seen each other since the early '80s (after Bernie left the band) before reconnecting last summer at the Sweden Rock Festival. Tormé also toured the world as the lead axeman in GILLAN and formed DESPERADO with TWISTED SISTER frontman Dee Snider and ex-IRON MAIDEN drummer Clive Burr, as well as fronting his own bands ELECTRIC GYPSIES and TORME (featuring Phil Lewis of L.A. GUNS/GIRL fame).

A young Zakk Wylde witnessed Bernie playing with Ozzy at Madison Square Garden in New York City on the one of the very few dates Bernie did with Ozzy. Zakk called Bernie "his hero" and insisted on a selfie when they met at Sweden Rock.

Ozzy told Rolling Stone about meeting up with Bernie at Sweden Rock: "I haven't seen him for a fucking thousand years. Someone told me he was outside my dressing room. I went, 'No.' He said, 'I'll never forget the time I played with you, Ozzy. It was a lot of fun.' I couldn't remember what he looks like. It had been that long."

Tormé has recorded over 24 albums in his career to date as a solo artist or bandmember.

Woke up to find out my friend @Bernie_Torme has died. He was a guitar god who played with @OzzyOsbourne & Ian Gillan. We worked together for 3 years, writing over 100 songs for the ill-fated Desperado. I loved that man & today my heart is broken. RIP Bernie. Your guitar weeps.