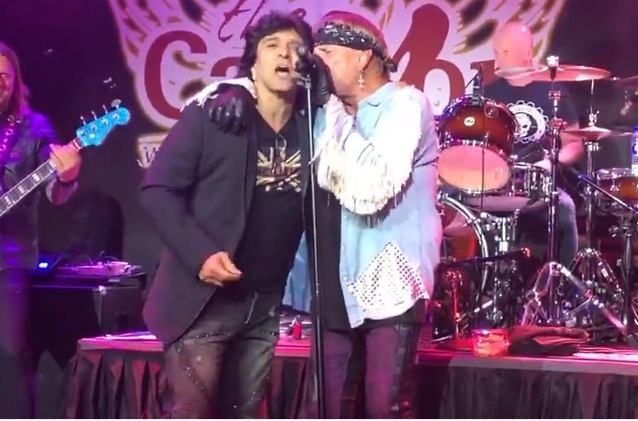 Former GREAT WHITE singers Jack Russell and Terry Ilous teamed up over the weekend to perform one of the band's classic songs.

During Saturday's (April 27) JACK RUSSELL'S GREAT WHITE concert at The Canyon Santa Clarita in Valencia, California, the original GREAT WHITE singer invited his successor Ilous to join him on stage for a rendition of their former band's song "House Of Broken Love".

Fan-filmed video footage of the performance can be seen below (courtesy of Michael Eskenazi).

Ilous wrote after the show: "Saturday I was invited by Jack Russell / JACK RUSSELL'S GREAT WHITE to attend his show at The Canyon Santa Clarita. I was surprised and humbled that they asked me up on stage for a bit of 'House Of Broken Love'. While many have assumed negativity between us in the past, I was brought on after Jack had been let go, and in fact we never held any ill will towards each other. Jack is the real deal, one of the founding members, and the voice of GREAT WHITE. I am grateful to Jack, GREAT WHITE, and the fans for all your support while I was in the band."

Jack responded in his own post: "Thank you, Terry Ilous, for the kind words! It was our pleasure!"

Last summer, Russell blasted his former bandmates for the "despicable" way Ilous was kicked out of the group.

In an interview with Daily Boom, Russell, who was himself fired from GREAT WHITE in December 2011 (after being on hiatus from the group since 2009),commented on Terry's exit from the band, saying: "I actually heard for the first time one of [GREAT WHITE's] more recent songs about a month ago and I have to admit that Terry Ilous's voice sounded really good on it.

"I was really surprised that they [GREAT WHITE] let him go recently, and so I got in touch with him because I've heard he's a really nice guy," he continued. "I have a feeling we're going to end up being friends. We're both singers and we've both got lead singer disorder [laughs] and I don't blame him for anything. He just took an opportunity that was offered to him and it was a good career move, so why not? He wasn't being deceptive at all; it was my dear friends that were. They turned around and did this lousy thing to him and he was totally blindsided and I feel really bad for him.

"I saw the video of them with their new singer and Terry onstage together [at the Monsters Of Rock cruise in February 2018], showing that it was in the works for months, and, to me, that just made it such a despicable act," Jack added. "They couldn't tell him in person or even make a phone call, and that was exactly how it happened to me. That was what upset me. It wasn't the fact that they didn't want to play with me, because I get it — I was a mess, I was a total wreck — but rather than have that conversation, they kept dodging me. I know what that's like to be treated that way, and I felt bad for him. Terry is a good guy, and I wish him the best. I have no ill will towards anyone at this point, and I wish them all the best, but Terry maybe just a little more success than the others now."