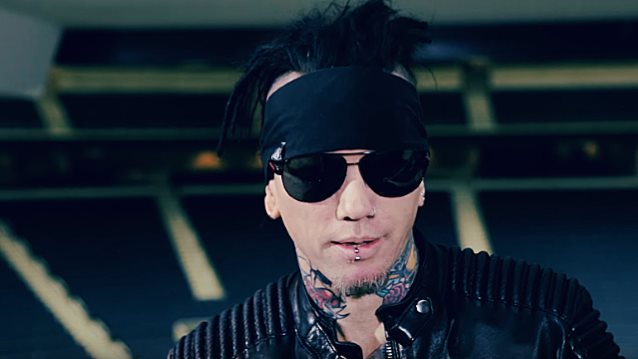 According to TMZ, former GUNS N' ROSES guitarist DJ Ashba has been arrested on suspicion of driving drunk.

The 45-year-old musician, who was also involved with Nikki Sixx's SIXX: A.M. project, was pulled over on Friday, July 27 in Fairbury, Illinois for failing to stop at a stop sign. Since the guitarist allegedly showed signs of impairment, officers gave him field sobriety tests, which he apparently failed, so he was arrested and taken to jail.

A mug shot of the guitarist, whose real name is Darren Jay Ashba, can be seen below.

Ashba, who lives in Las Vegas, was raised in Fairbury, where he returned over the weekend to attend the 29th running of the Prairie Dirt Classic at Fairbury American Legion Speedway. He also reportedly performed the U.S. national anthem at the event.

Ashba took to his Facebook page on Sunday (July 29) to write: "It was so nice to chill back home for a few and reset. Thank you to everyone in my hometown of Fairbury for having me out to perform the National Anthem for ya'll. It was an honor!"

DJ joined GUNS N' ROSES in March 2009 following the departure of Robin Finck. He exited the group six years later, saying in a statement that he was leaving GUNS N' ROSES "to dedicate myself to my band SIXX: A.M., my adoring wife and family, and to the many new adventures that the future holds for me."

Earlier this year, Ashba and his SIXX:A.M. bandmate James Michael launched a brand new project called PYROMANTIC. The duo is putting the finishing touches on an album's worth of music.

Sixx has hinted in recent interviews that SIXX:A.M. was over, explaining that he was planning on pursuing a number of different projects in 2018, none of which involve playing in a group.

It was so nice to chill back home for a few and reset. Thank you to everyone in my hometown of Fairbury for having me out to perform the National Anthem for ya’ll. It was an honor! Till next time....