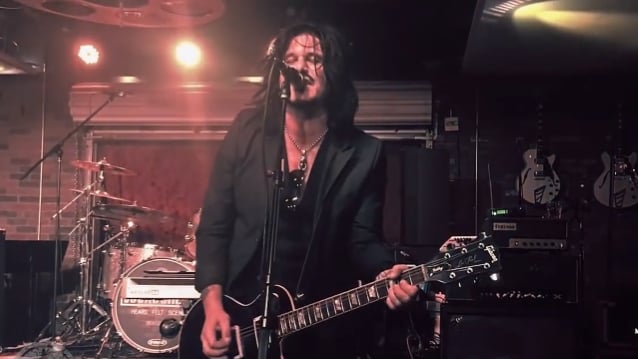 Former GUNS N' ROSES Guitarist GILBY CLARKE On Hearing 'Appetite For Destruction' For First Time: 'I Was Blown Away'

Former GUNS N' ROSES guitarist Gilby Clarke recently spoke with IndiePower. The two-part conversation can be viewed below. A few excerpts follow (as transcribed by BLABBERMOUTH.NET).

Gilby: "That was the idea. We were managed by KISS's manager at the time, Howard Marks. At that time, Howard only had three acts — us, Diana Ross and KISS. Of course, his first day, [he said], 'Maybe Paul should produce you guys.' Us being huge KISS fans, we were just excited to meet him, number one. The producing thing ended up going to Jimmy Ienner, who produced GRAND FUNK [RAILROAD], [THE] RASPBERRIES... I was probably one that was pulling more for Paul, the singer was probably pulling a little more for Jimmy Ienner."

Gilby: "We were a little early. When I hear the record, I don't love the record. I thought it was a bad representation of what we sounded like. It's just too slick. We were very raw. Our influences at the time was like GENERATION X and THE CLASH... I remember sitting down with Jimmy Ienner, and he was saying, 'What do you guys want to achieve on this record?' We all said the same thing — 'GENERATION X.' He goes, 'Yeah, well, you've achieved that. Now let's make it listenable.' He didn't get it. He didn't get the rock n' roll part. He was just thinking singles and charting and stuff like that, and I think the way that he was chasing that with us, which we clearly weren't... the record, in my opinion, a little messy. It's not cohesive. You can take any live board mix of the band [and] you'll get a better feel of what the band was than the record."

On his next band, KILL FOR THRILLS:

On his first impression of "Appetite For Destruction":

Gilby: "I was blown away. I actually heard it on a cassette. The first thing I said when I heard that record is, 'Who the hell played guitar on that record?' I've said this to Slash over the years too, [but] when you saw GUNS N' ROSES at that time, the first thing you said was Axl [Rose] was a star. He was great. Steven [Adler] was solid. Slash was a mess. He was always out of tune; he didn't really play that great. You couldn't really tell that he was a talented guitar player in those early GUNS days. When I heard that record, the first thing I said was, 'Oh my god — that's the best guitar playing I have heard in forever.' That record, they nailed. To this day, it's still the one of the greatest rock n' roll records ever created. Whatever they did, the band that I saw live many times did not sound like the band on that record that I heard. That record was fantastic. Obviously, as I got to know Slash, I've talked to him about that. He just said that they focused — they put all the side shit away and they really focused on making a great record. You see the results of that."

On getting the call to join GN'R:

Gilby: "I heard the same thing everybody else heard. I didn't have any in, really. I had heard that Izzy [Stradlin] was unhappy. Josh Richman was working with the band at the time. Josh was an old friend of mine, and I called Josh because I didn't have Slash's phone number... I called Josh and go, 'What's going on out there?' He goes, 'We don't really know what's happening. We don't know if Izzy's gone for good or what's happening, but they are looking for a guitar player. You know what? I'm going to give Slash your number.' He did, and I got a call from Slash that night. He said, 'Hey, man. We're looking for a guitar player. Will you come down and play?' At that time, the '[Use Your] Illusion' records weren't out yet. They were just about to come out. They had already started to do a little bit of pre-touring on it, but the records weren't out. He said, 'Just learn three songs and come down tomorrow'... I actually played with them for three days and probably played six songs total. He said, 'All right, we'll let you know.' The next week, he called me. Sitting in my living room, MTV's on in the background with no music on. I was on the phone with [former CANDY and future ALICE COOPER guitarist] Ryan Roxie, and I look up and I go, 'Ryan, my picture's on the TV right now.' The next thing you know, I got a [call waiting] click, and it was Slash. He goes, 'Hey, man. You got the gig. We're leaving next week. Learn the whole catalog.'"

On how long it took to get comfortable playing with the band:

Gilby: "I don't know if I ever really felt equal, but to feel as a part of the band, it did take a little while... I think even everybody at that point didn't know what Izzy was really doing. They were extremely respectful — Axl was incredibly respectful to me — but it's not like they didn't treat me like a bandmember or did. I think they were just cautious, because there probably was a chance that Izzy was going to come back. The difference between me [joining] and when the guys started the band [was], I knew what I was getting into. I knew the band's reputation. I knew that things could end tomorrow. I even said to myself, 'I'm not going to try to be Izzy. I'm going to just be myself. If they accept me for who I am, then great — it's all icing on the cake.'"

Gilby: "Everybody was starting to write some songs for the next GUNS record. Slash likes to do things the band way. He likes to jam with guys and work on different ideas — kind of make the 'soup' of the song. Him and Matt [Sorum] were getting together, and then he called me and said, 'Why don't you come down and let's jam on some of these ideas?' I said, 'Well, I've got a couple of ideas too.' We all got together and started recording a bunch of songs. We actually had a lot of really good bones of a song — no lyrics, but just musically. Finally, it was time to present it to Axl, and Axl heard it and he just wasn't into it. From what he told me, he goes, 'I want to go in a different direction with the band. The days of 'Appetite' are over. I want to bury that record.' He liked bands like NINE INCH NAILS. He liked PEARL JAM. I'm speculating, but I think when he heard the stuff, it might have sounded a little to southern rock, a little too guitar-based. It just didn't do anything for him... It's kind of like what happened with me. I had a bunch of songs; I gave him to Axl; I said, 'If you like any of these, let me know.' He didn't like any of them, so I made 'Pawnshop Guitars', my first solo record. I think Slash did the same thing — 'I really like these songs. I really want to get them out there.'"

On performing at GN'R's induction into the Rock And Roll Hall Of Fame:

Gilby: "The performance itself, I actually had the time of my life. All the other stuff was a little political. I'm not talking about the band guys; I'm just talking about the whole Rock And Roll Hall Of Fame, how they handled things. But the actual playing with the guys — having Myles [Kennedy] with the biggest balls in the world standing up there and singing, doing a great job; having Matt and Steven, the two of them, sharing the stage together. There were some really cool moments. It really felt more like a family, and more like we were on the same team together. To me, that really felt good. The whole thing about not being inducted and stuff definitely hurt my feelings, but it's part of life. I'm a big boy; I can take it. A GUNS N' ROSES fan will accept me for my contributions. I had nothing to with 'Appetite For Destruction'. I had nothing to with the 'Illusion' records, and I accept that. All I did was, I was a team member when we went on tour and representing the band all these years later. I think the real fans see that, and I'm okay with that."

After exiting GUNS N' ROSES, Clarke continued as a producer and solo artist, while also playing in SLASH'S SNAKEPIT, ROCK STAR SUPERNOVA, HEART and other acts.