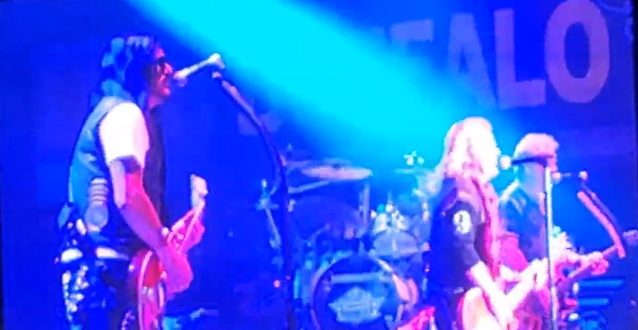 Former GUNS N' ROSES guitarist Gilby Clarke performed with NIGHT RANGER during their August 9 concert at Buffalo Chip in Sturgis, South Dakota. Clarke was filling in for regular NIGHT RANGER guitarist Keri Kelli, who was unable to make the gig due to a knee injury.

A short time after the show, NIGHT RANGER shared a clip from the concert and included the following message: "Huge thank you tonight to Sturgis and to @gilbygtr for playing with us! Keri was out tonight due to a knee injury (feel better brother!) but it was awesome to have you up there with us, Gilby! As always, Sturgis - YOU ROCK!" Gilby responded in the comments below the video: "so great… really enjoyed myself, thanks".

NIGHT RANGER released its 12th studio album, "ATBPO", on August 6 via Frontiers Music Srl. "ATBPO" stands for "And The Band Played On", an ode to making music during the COVID-19 era.

NIGHT RANGER began writing the album in early 2020, amid the onset of the global pandemic. After narrowing down the song selection and tightening them up to their well-known rock and roll sound, the band hit the studio, although separately, due to the times we are in.

"With 'ATBPO', I really feel like we've gone back to our roots of who we are as a band," bassist and vocalist Jack Blades told the Sinclair Broadcast Group. "Even though this album was a challenge to make, it was all us together. Every song is all our heart and soul and what's coming from us. These songs are directly who we are. That's why we're so stoked to get this album out to the fans so they can experience the whole picture and not just a few singles. They get to experience what NIGHT RANGER is all about."

Huge thank you tonight to Sturgis and to Gilby Clarke for playing with us! 🎸

Keri was out tonight due to a knee injury (feel better brother!) but it was awesome to have you up there with us, Gilby! As always, Sturgis - YOU ROCK! 🤘