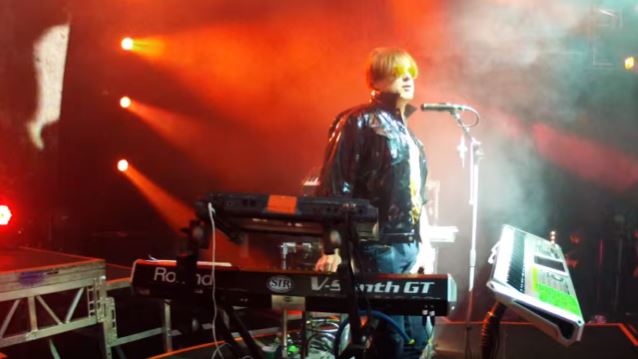 According to TMZ, former GUNS N' ROSES member Chris Pitman has filed a lawsuit against the band's lead singer, Axl Rose, over an unpaid debt for services the multi-instrumentalist provided to the group. Pitman claims that Rose wrote him a promissory note for $125,000 that he was owed for over a year's worth of work. In the suit, Pitman claims that Rose was supposed to pay up by October 2012, but has failed to do so. Pitman says that Rose now owes him more than $163,000 with interest.

Pitman joined GUNS N' ROSES in 1998 and remained in the band's lineup until earlier this year. During his time with the band, Pitman served as a second keyboardist, second bassist, provided backing vocals and added some percussion and programming during the group's shows. He also did some co-writing with the band over the years.

Pitman earlier in the year apologized for calling the GUNS N' ROSES reunion a "nostalgia tour."

In a social media post that was quickly deleted (but captured on Reddit),Pitman wrote: "This is a nostalgia tour, please don't mention those who are there the last 20 fkg years [sic] oh god no! ...(a money grab) FU."

The musician joined GUNS N' ROSES in 1998, and is featured on every song on the band's sixth album, "Chinese Democracy". He was one of the longest-serving members of the group's pre-reunion lineup.

GUNS N' ROSES' two-month North American stadium tour grossed a massive $116.8 million with over one million tickets sold, according to Billboard.com. The "Not In This Lifetime" trek, which ran from June 23 through August 22 and included 25 concerts in 21 cities, earned a staggering amount for a rock band in 2016. The band grossed an additional $15 million earlier in the spring from two shows in Las Vegas and another pair at Coachella.