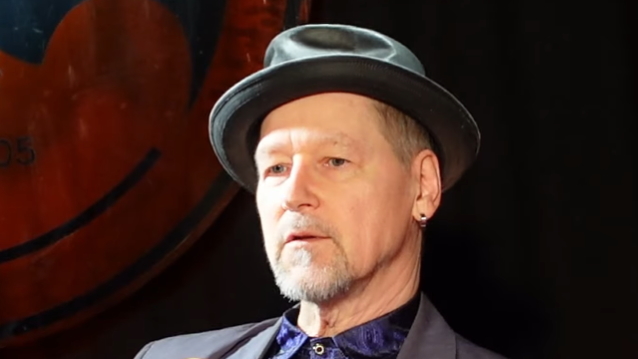 Former HANOI ROCKS guitarist Nasty Suicide (born Jan-Markus Stenfors) has revealed that he is battling prostate cancer. The 58-year-old musician discussed his diagnosis in a new interview with Finland's Chaoszine which focused primarily on promoting the upcoming debut album from his new band STENFORS.

He said (as transcribed by BLABBERMOUTH.NET): "I can talk about it. It's no secret. And it actually had a role to play in recording the [STENFORS] album as well. When we decided we're gonna do the album, everything was fine. But then, as soon as we started doing it, I got my diagnosis of prostate cancer. So that was, like, 'Oooh. What's gonna happen with the album then?' [laughs] was first at mind. Well, anyway, it didn't affect that at all — except that, obviously, then when I went into chemo in the summer while we were doing the recording bit by bit, it did affect, obviously — it affects everything; it goes everywhere, and it's nasty stuff [laughs], but it's supposed to take care of the cancer, so I've always taken it as a thing — you're supposed to feel like something. But it kind of affected me a little bit while we were doing the recording, but I think it went pretty well.

"So, I'm through the chemo part now and I've been through it for a few months and feeling really good," he continued. "Now we started the radiation phase, so until the end of March I'm going to radiation every day. So, bit by bit, they're giving the disease the dose that it needs."

As for his prognosis, Jan said: "It's been positive. Actually, the direction is really good. I'm pretty confident that it's just gonna be kind of chronic state; you have to go to checkups and give it a little dose of something every now and again. I feel good. I mean, I feel nothing from it."

HANOI ROCKS originally broke on to the hard rock scene in the first half of the 1980s, becoming one of the first Finnish bands to make an international impact. HANOI ROCKS's career was subsequently derailed after drummer Nicholas "Razzle" Dingley's 1984 death in a car accident caused by MÖTLEY CRÜE's Vince Neil. Internal tensions and the commercial disappointment that was 1985's "Rock & Roll Divorce" led to singer Michael Monroe leaving the band that year, thus putting an early end to HANOI ROCKS.

STENFORS's debut single, "Then It's Gone", was released on February 18. A full-length LP, "Family Album", will arrive in June.

After the breakup of HANOI ROCKS, Nasty Suicide and his former bandmate Andy McCoy recorded an acoustic album under the name THE SUICIDE TWINS which was released in 1986 and was titled "Silver Missiles And Nightingales". They also started THE CHERRY BOMBZ, which included Timo Caltio on bass (later replaced by Dave Tregunna),Terry Chimes on drums and singer Anita Chellemah. THE CHERRY BOMBZ released two EPs, "The Cherry Bombz" (1985) and "House Of Ecstasy" (1986) as well as a live album, "Coming Down Slow" (1986). After THE CHERRY BOMBZ, Nasty went on to form his own band CHEAP AND NASTY, which was active from 1990 to 1994. Suicide was also a member of Monroe's band DEMOLITION 23 in the early Nineties. After the breakup of DEMOLITION 23, Suicide recorded an album under his given name, titled "Vinegar Blood", in 1996; it was released in Finland only.